UPDATE: Third Child Has Died After Fire in Sheboygan Falls 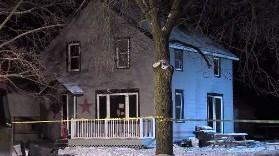 UPDATE: The third child, who had been in critical condition, has died, according to a post on the family's Go Fund Me Page.

One child managed to get out safely thanks to the heroic actions of an 11-year-old who later died while trying to save her two younger brothers.

The makeshift memorial outside this home has doubled in the last few hours. After kids got home from school crosses, balloons and flowers made their way onto the Maki family's lawn.

The family lost two children from the fire, and they are fighting to keep another. Their go fund me page says ten year old Ben is fighting for his life.

The brother-in-law of the family has posted the fundraising page. Ryan Passini says he will update the page with conditions and other things relaying to the family.

Several people have come to this block to drop off and collect donations.

Clint Witt doesn't know the family, but has two family members that live on this street.

He has been out since 10 this morning collecting money for the family.

“I got 10 grandchildren it hit me pretty hard. I still want to do this. I thought a lot of people were going to look today, so I figured why not hit them up for money,” said Witt.

According to Riffel, when the fire broke out, the 11-year-old alerted her three siblings to the danger and was able to get a 9-year-old girl out of the house safely. That child is not hurt. The 11-year-old girl then went back into the building to get a 10-year-old and 7-year-old out.   Firefighters found the three children  inside and transported them to a Sheboygan hospital where the 7-year-old died.  The other two children were transferred to Children’s Hospital in Milwaukee.

Firefighters arrived on the scene of the fire in the 500 block of Western Avenue within minutes of its first report and saw heavy smoke coming from the building.  According to Riffel, all of the children lived in the house with their parents, who were not home at the time of the fire.

Investigators are still working to determine the cause of the 2 alarm fire.