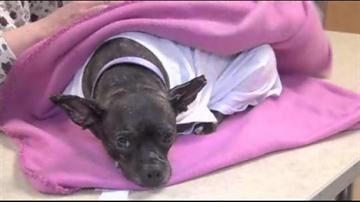 MILWAUKEE-Milwaukee police have arrested a 21 year old man for taking a dog from her owner's yard.

Investigators say it is unclear if the same man then set the dog on fire.

A Milwaukee woman's dog was stolen from her yard near 32nd and Wells back on March 13th.

A casino worker found the mutt 11 days later near Potowatomi with burns over 90% of her body.

A microchip helped shelter workers at MADACC trace the animal back to her owner.

Beatrice the dog was in intensive care for six days at the Milwaukee Emergency Center for Animals.

Her hair will probably never grow back, leaving her susceptible to infection.

When the dog was found, she was without her collar.

Anyone with information is asked to call Milwaukee Police at District 3.