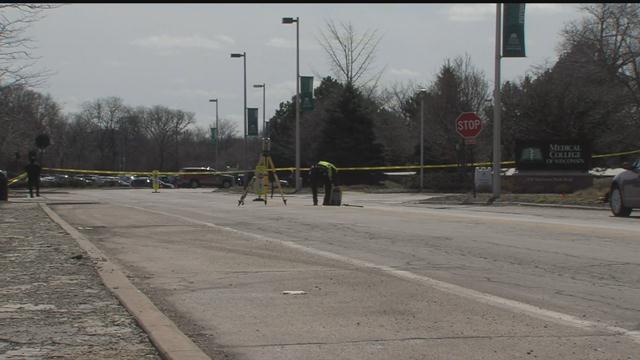 UPDATE: This morning at about 9:00 a.m., sheriff’s deputies responded to a call at 1101 N. 87th Street in Wauwatosa at an entrance to the Medical College Complex grounds.

According to the Milwaukee County Sheriff's Office, a 65-year-old man driving a Chevy Tahoe had stopped to get directions and while following another vehicle, struck the pedestrian in the intersection which was marked with four-way stop signs.

A trauma nurse at the scene called for medical help and life-saving efforts were made until a trauma surgeon called time of death at 9:15 a.m.

The 32-year-old pedestrian, Rattanawadee Kotewong, was from Thailand, and resided in Wauwatosa while a student attending the Medical College of Wisconsin.

Any possible charges or citations are pending investigation and District Attorney’s Office review.

ORIGINAL: A pedestrian was fatally hit near the Medical College of Wisconsin in the area of 87th and Watertown Plank Road.

Medical Examiner is on the scene.