UPDATE: One in Custody; Tosa Police Searching Another Teen in Crime Spree that started in Milwaukee 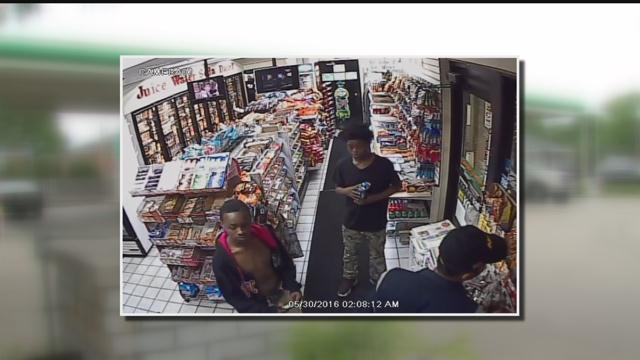 UPDATE: According to the Wauwatosa Police, the 13 year old involved a crime spree is in custody.

In the photos from police, he is the one wearing the unzipped sweatshirt in the surveillance pictures.

Police said he has been in custody for a few days from another case involving crimes in the City of Milwaukee.

The 14 year old is not in custody. Police said he is aware police are looking for him.

Tosa police are still investigating and no charges have been issued yet.

ORIGINAL: A late night end to a Memorial Day barbecue turned sour for the McCoys.

A 2004 Jeep Liberty, parked by a tree in front of their Milwaukee home, was stolen on May 30.

"We called the police and they said teenagers stole your car, 14, 16-year-olds," he said.

"A fresh steal and within hours of that they're out committing other crimes," said Wauwatosa Police Lt. Brian Zalewski.

Police said the teens first target was at 68th and Milwaukee Avenue in Wauwatosa.

Around 2 a.m., the suspects allegedly parked the jeep in a nearby hardware store lot and walked up to a man and woman walking home.

"One subject implied he had a gun in his pocket," Zalewski said. "The female victim gave the subject her purse after he demanded it."

Soon after, the teens were caught on surveillance at a gas station, trying to use the victim's credit card.

Later on, an officer tries to pull over the stolen jeep, but the driver speeds off, reaching 55 miles an hour on State Street in the middle of the afternoon. Police end the pursuit.

"It was a very nice day out, the high chance of pedestrians in the area and it wasn't worth the risk to the public at this point," said Zalewski.

The next day, May 31, Tosa police said the suspects used a brick to break into the UW Credit Union bank.

The stolen jeep was seen on the business's cameras before it was found the following day in a neighborhood not far from the McCoy's.

"That's like a slap in the face," said Rose McCoy. "It was like they were trying to put it back at the scene of the crime."

Suspect one is described at a black man, 14-16 years old, 5'5", weighing 120-140 pounds. He has short hair with a small side part and was wearing a dark-colored zip-up sweatshirt with red lettering, red inside the hood and tan shorts.

If you have any information, please call Wauwatosa Crime Stoppers at 771-TOSA (8672) or text-a-tip to "crimes" using keyword "tosa". Citizens can do both anonymously.