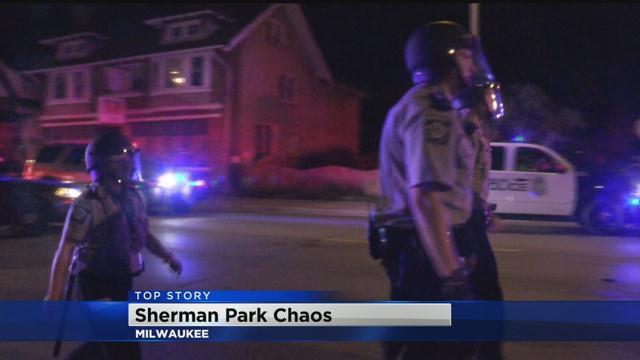 Kevin Brown brings his grandchildren to the Sherman Park nearly every day.

"It's usually real quiet over here. I like to come here because it's a bigger park, nice, and quiet.

He hadn't heard about the incident on Wednesday night, but he isn't surprised. Brown says he will not go to the park at night.

"Right here on Burleigh, there's a lot of activity at nighttime over here on this side. You've got young kids out of school with no where to go. So, I guess they had nothing else to do but throw bricks and bottles," said Brown.

A witness at the scene said a group of teenagers was causing trouble on Tuesday too.

When asked what the city will do about the incident, Milwaukee Mayor Tom Barrett said there's already police assigned.

"You're seeing that happening right now, and the police chief talked about that earlier this week, along with the common council president, myself, the chair of public safety. We're going to see a lot of police deployed on beat patrol, on bicycles, we're gonna continue to have our data driven approach, and we know that the summertime is a time where there's more activity. Both positive activity and negative activity, and we're letting the people in our community know that we're taking this very, very seriously," said Mayor Tom Barrett.

The mayor spoke at an event for the city's Office of Violence Prevention. At the meeting he addressed the problem of violence in the city.

"Every person in this room knows that public safety cannot be achieved with police officers alone," said Mayor Tom Barrett.

ORIGINAL: Milwaukee Police responded to Sherman Park around 9:40 PM on June 29 for a disturbance with several dozen young people. The group was throwing rocks and bottles and had damaged a window of a nearby gas station and the window of a Milwaukee County Transit bus.

Along with the Milwaukee County Sheriff’s Office, MPD and motorcycle units were able to disperse the crowd. The officers were seen in riot gear.

No arrests were made and no officers were injured.

MPD is working to identify the people involved in this incident and is coordinating with the Sheriff’s Office and the Parks Department to ensure additional resources are deployed in the area.