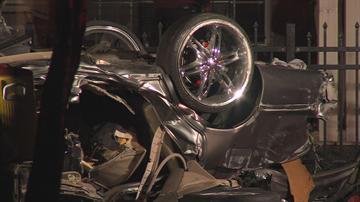 GLENDALE -- Shattered glass, metal and plastic pieces stretch for dozens of yards, while orange cones mark the scene of Friday night's deadly crash in front of senior apartments in Glendale.

Cynthia Barnes was out for a walk with her husband that night and stopped at the corner of Silver Spring Drive and Bethmaur Lane just moments before the crash.

\"I would've hoped we could have helped someone, but it was impossible,\" Barnes said.

Around 7:45 p.m., the couple watched a vehicle pull out onto Silver Spring Drive in front of another car headed east.

\"I don't know if that's what spooked the driver, or if he was inattentive, but he was driving at a high rate of  speed,\" Barnes said.

Barnes says the car coming down Silver Spring  veered off the road, clipped a small tree and smashed through signs and a light pole before flipping three times in mid-air.

Lang first heard about the crash Friday night, only to find out Saturday that family friend James Taddy was the driver.

\"You hate to see anybody die, but when you see somebody die this way and somebody that you knew for many, many years, it is difficult,\" Lang said.

Witnesses say some pieces of the car flew onto second-story balconies.  North Shore Fire crews tell CBS-58 News the victims' injuries were some of the worst they've ever seen.

\"Just about every call we go on involves something bad happening to good people and it's an unfortunate situation,\" Captain Mike Weber said.

Most of Saturday morning, people from the area reconstructed the scene in their minds -- a tragic crash Lang thinks could have been avoided.