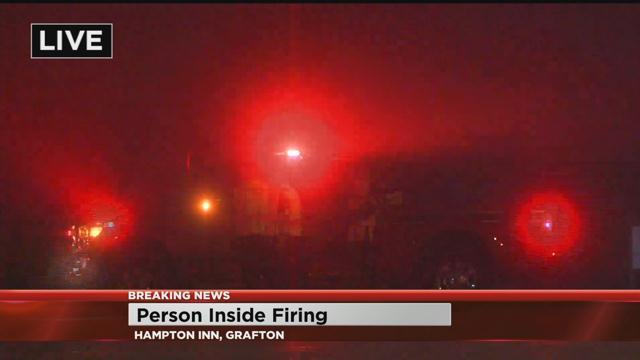 A 38-year-old man held his ex-girlfriend captive, and then took his own life inside a Grafton hotel Wednesday night. On Thursday, that man was identified as Michael Kennedy.

Grafton Police told CBS 58 they were on alert for Kennedy. Washington County Sheriff's Department issued a warrant for him after Kennedy was suspected of entering a home illegally on Tuesday night.

On Wednesday, Kennedy went to his ex-girlfriend's home in Saukville. The Saukville Police Department received a call of a burglary and false imprisonment of a woman. Officers believed a male suspect broke into the woman's home and then took her from the home and forced her to drive him around. After a time, the woman was released unharmed by the man and contacted the authorities.

The woman called police, and Saukville officers determined the man was inside the Hampton Inn and contacted the Grafton Police Department to assist.

Around 6:30 p.m. Wednesday evening, officers from the Grafton Police Department and the Saukville Police Department attempted to make contact with the suspect inside the Hampton Inn. When the officers entered the room, shots were fired by the suspect. Officers secured the area and began evacuating the building and activated the Ozaukee County Special Response Team unit.

Ray Gordon was evacuated from the Hampton Inn.

"I was down here for work and I was just sitting in my room. My wife was going to pick me up and a knock on the door, and it was the officer saying there's a situation going up on the third floor and we're evacuating everyone down to the lobby," said Gordon.

Around 10:00 p.m. Wednesday after all attempts at establishing contact with the suspect failed, members of the Ozaukee County Special Response Team entered the room and found the suspect dead of an apparent self-inflicted gunshot wound.

Further investigation by police confirms that no shots were fired by law enforcement during the incident.

CBS 58's Eric Levy visited the last known address for Michael Kennedy in South Milwaukee. He lived in the lower left corner of a small apartment building set in a neighborhood. Inside the mailbox attached to the building was mail addressed to Kennedy.

"Total shock, total shock," said a neighbor who didn't want to be identified.

She heard about the incident at the Hampton Inn hotel, and described Kennedy as quiet, except for one situation in particular.

"There was a big altercation, my husband went down there and he pulled a knife on my husband and dared him to cross the threshold," she described.

CBS 58 obtained a criminal complaint from 2014. It alleges Kennedy went in to an ex-girlfriend's home in Saukville and urinated on a couch and blanket, and did other things. It's not known, to us, if it's the same woman whom he pulled from her home and made her drive around before being let go.