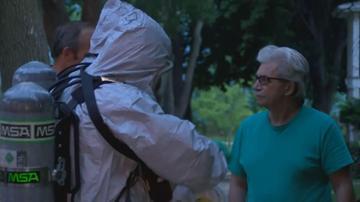 UPDATE: CBS 58 spoke to the woman who owns this house and she said she got the dogs for her son, a paranoid schizophrenic.

She also said her son, who she lives with, was the one taken away in an ambulance.

EMS was called after he had some type of episode and that's when the condition of the home and animals were discovered.

The home was still boarded up on Sunday.

Eveline McKenzie, the homeowner, said the dogs were her son's best friends.

Her boyfriend, Dave Nickels, said he thinks the situation is overkill.

The Fire department said on Sunday the home will need to be cleaned up before it is opened back up.

MILWAUKEE- Milwaukee police and fire department were keeping a house at 62nd and Main Street blocked off.

Neighbors said the person who lives there may have had some type of animal hoarding situation.

The fire department confirmed that a woman there did have a large number of animals.

MADACC said they recovered seven dogs and three cats from the home.

The Fire Department said the health department was forced to shut down the house because it was in such poor shape.

It was determined that it was not safe for the woman to live in the house.

Windows and doors of the home were boarded up Saturday night.

A number of the emergency responders were wearing hazmat suits, they were taking large yellow bags marked hazardous from the backyard.

The Fire department told CBS 58 the initial call to this house was for an EMS response, while on scene someone loaded into an ambulance.

One neighbor explained that he's been complaining about this house for a long time before all this happened on Saturday night sometime before 8 p.m.

The animals are being held at MADACC.