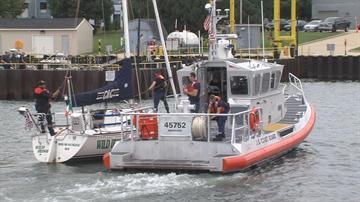 The Coast Guard located Kiehm's boat, the Wild Irish, adrift in Lake Michigan about 10 miles northeast of Milwaukee, Thursday afternoon, after being notified by the captain of the Lake Express Ferry who was on a scheduled transit to Muskegon, Michigan.

Kiehm was last seen aboard his 26-foot white sailboat at McKinley Marina in the Milwaukee Harbor between 11 a.m. and 4 p.m., Tuesday.

Only after a probable search area is saturated with the appropriate assets and resources, and persons lost or in distress are still not located, is a decision made to suspend a case.

“The decision to suspend a search and rescue case is one of the most difficult decisions ever to make,” said Cmdr. Erik Leuenberger, chief of response for the Coast Guard Sector Lake Michigan.

“I extend my sincere condolences to the family and friends of the Joseph Kiehm. After conducting an exhaustive search with our partner agencies in Lake Michigan and crisscrossing more than 12,000 square miles from the air and surface of the lake we made the decision to suspend the active search.”

The cumulative amount of area searched is more than 12,000 square nautical miles. Coast Guard and partner agency assets have been searching for a total of more than 60 hours.

The search began on noon, Wednesday, when a search-and-rescue controller at Coast Guard Sector Lake Michigan in Milwaukee received a phone call from Kiehm’s wife reporting him missing.

The Coast Guard is asking anyone with information about Kiehm to call Coast Guard Sector Lake Michigan at 414-747-7190.

CBS 58 spoke with Kiehm's wife on Thursday morning.  She's taking this very hard but says the Coast Guard is doing a wonderful job with the search.

Someone came forward and confirmed to the Coast Guard that they saw Kiehm leaving in his boat \"Wild Irish\" Tuesday night from McKinley Marina.

48-year-old Joseph Kiehm was last seen between 11 a.m. and 4 p.m. September 16 at McKinley Marina aboard his 26-foot white sailboat, the Wild Irish.

Officials say Kiehm had a marine radio aboard, but never answered any Coast Guard calls.

A search-and-rescue controller at Coast Guard Sector Lake Michigan in Milwaukee received a phone call from Kiehm’s wife reporting him missing at noon Wednesday.  He's been reported missing to the Milwaukee Police Department as well.

Coast Guard stations along the Lake Michigan coast are conducting checks by boat and on land with local marinas and partner law enforcement agencies.

The Coast Guard says crews have to check the entire lake because they don't know which direction Kiehm was headed.