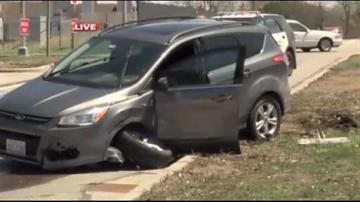 MILWAUKEE -- An undercover operation to bust a suspected drug dealer leads to a police chase, crash and a harrowing encounter for a River Hills Homeowner.

The Ozaukee County Sheriff's Department says the suspect took off in his SUV when officers tried to arrest him for selling heroin in Mequon.

He lost control and hit a road sign then ran from the scene into a wooded area and entered a house on Green Tree Road.

The homeowner confronted him and with the help of a police dog, the suspect was arrested.

The suspect had a few injuries related to the crash.

The homeowner was not hurt.