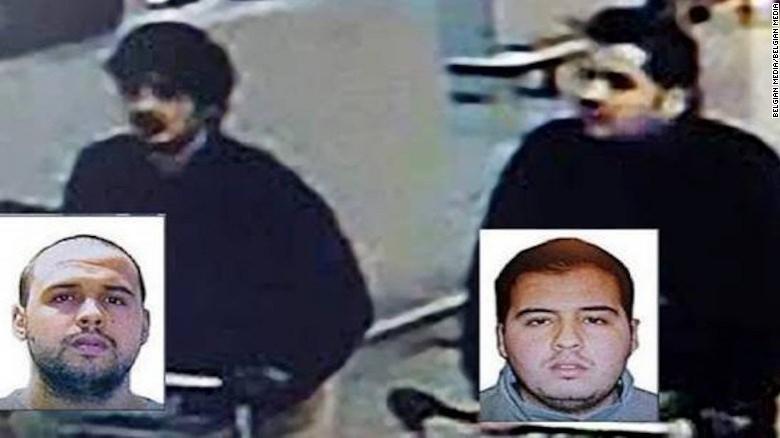 (CBS-Brussels) Belgian media reports that a third man, the suspected ISIS bomb-maker behind the attacks, has been arrested.

Belgian media said police took Najim Laachraoui, the Belgian national suspected of making the bombs for the Nov. 13, 2015 attacks in Paris and yesterday's carnage in Brussels, into custody. Officials did not immediately confirm the reports, which said he was arrested in the southwest Brussels district of Anderlecht.

His arrest would be a major blow against what appears to have been a deadly ISIS cell in Western Europe, but as worries over the Belgian authorities' ability to tackle the home-grown threat mounted, there was also new information to suggest there was a fourth, still-unidentified bomber.

(CNN)Authorities have identified the two suicide bombers involved in the attack at the Brussels airport on Tuesday, a senior Belgian security source told CNN.

They are brothers Khalid and Brahim El Bakraoui, both of whom were known to police, but for organized crime, not for acts of terrorism, state broadcaster RTBF reported.

Khalid El Bakraoui rented an apartment in Brussels that was raided last week, the source said.

Investigators are expected to ascertain clues based on the explosives that struck the airport and a metro station in Maelbeek, and they're hunting for the one remaining suspect that they think is alive, digging up information and attempting to untangle the network used to plan the attack.

While Belgian officials say both brothers were suicide bombers, a U.S. official briefed earlier on preliminary evidence from the investigation says authorities are looking at the possibility that one of the airport explosions may have been caused by a bomb inside a suitcase and the other was a suicide bombing.One of the first major breaks in the investigation appears to have come from a taxi driver.

Just hours after the explosions, Belgian authorities released a photo from airport security that showed three men -- two in black and one in lighter clothes, wearing a hat.Video shows the men exiting a taxi and moving through the airport, according to two U.S. officials.

The two in darker clothes are believed to be suicide bombers who died in the explosions in the airport's departure lounge, according to Belgian federal prosecutor Frederic Van Leeuw.

But investigators believe the man in light-colored clothing planted a bomb at the airport, then left -- a move that appeared to be planned, the two U.S. officials said."It's Salah Abdeslam all over again," Dirk Coosemans, a reporter at Belgian newspaper Het Nieuwsblad, told CNN. "This one was there to be a suicide terrorist, and he didn't do it."

Belgian media also reported a Kalashnikov assault rifle was found in the departure hall of the Zaventem airport.Fortunately, a taxi driver called police shortly after the photo was released and said he believed that he drove the trio to the airport.

The driver told authorities that his passengers would not allow him to unload the suitcases from the cab. He also led investigators to the location where he picked the three of them up.That information prompted authorities to raid a residence after the attacks, the officials said.

Investigators found a nail bomb, chemical products and an ISIS flag during a house search in the northeast Brussels neighborhood of Schaerbeek, Belgium's federal prosecutor said in a statement.Forensic teams are now scouring an apartment building in that neighborhood and have been seen carrying out bags of evidence, according to CNN's Frederik Pleitgen, who was reporting from just outside the building.

Their work continued into the night.Determining what type of explosives were used will be crucial, according to CNN National Security Analyst Peter Bergen.

French prosecutors have said that the bombs used in the November Paris attacks were made from triacetone triperoxide, or TATP.

If the same type of bombs were used in Paris and Brussels, that would be a key clue linking the two attacks.

"Such bombs have been a signature of jihadist terrorists in the West for more than a decade because the materials are so easy to acquire, unlike military-grade explosives, which are tightly controlled in much of the West," Bergen said.TATP-based bombs require technical know-how and bulk purchases of hydrogen peroxide or hair bleach. That helps authorities winnow down potential bomb-making suspects, because making the explosives can sometimes bleach hair. So authorities can identify bomb-makers in part by recognizing unusually-bleached hair or asking sellers to report any suspiciously large purchases of hydrogen peroxide.While authorities have been able to move quickly on intelligence from the airport attacks, very little has been publicly revealed about the bombing at the Maelbeek metro station.

Coosemans, the Het Nieuwsblad reporter, says that's because there isn't as much surveillance there compared to the airport.

"We just know less about the Maelbeek attack because we don't have pictures there," he told CNN. "The police know less about Maelbeek."Two senior U.S. officials told CNN they believe the Belgium attack is tied to the same network as terror suspect Salah Abdeslam (ISIS has claimed responsibility for the attack.)

And the "working assumption" in Belgium is that the attackers came from the network behind the Paris attack, Belgian security sources said. However, they cautioned it is very early in the latest investigation.

The identities of the three airport suspects aren't clear to U.S. authorities, either because Belgian authorities haven't completed identification or haven't shared that information with counterterrorism officials in the U.S., the officials said.Going forward, intelligence sharing will be very important, says Steve Moore, a CNN law enforcement contributor.

"They obviously have some information. They don't know if they're looking at one cell or a series of cells. And so now it's time to get all around at the same table and exchange information," he said. "If you can get them all to use the same currency, I cannot believe that you can't get them all to share intelligence."