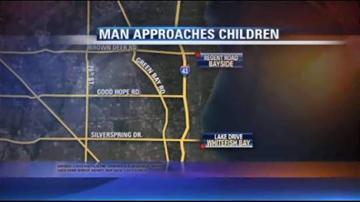 BAYSIDE -- Bayside police say they believe the stranger who approached a girl Monday and a Whitefish Bay Boy on the same day 45 minutes earlier had no criminal intent.

The man was well dressed and may have been handing out religions pamphlets and making religious statements.

A 12 year old boy described a similar encounter about 45 minutes earlier on the same day in Whitefish Bay.

Police from both departments say they believe it is the same man and that he used poor judgment and had no criminal intent.

Bayside Police say this does serve as an important reminder to parents to speak with their children about how to handle themselves in the community.

In both instances Monday , the children did not go with the man and were not touched.