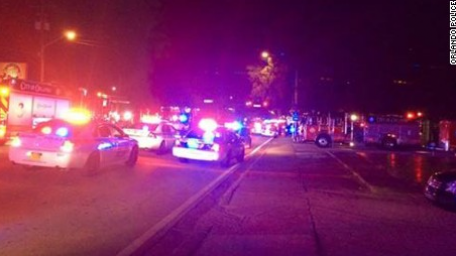 Orlando, Florida (CNN) Orlando shooting suspect Omar Mateen was interviewed by the FBI in 2013 and 2014, FBI Assistant Special Agent Ronald Hopper told reporters Sunday. "Those interviews turned out to be inconclusive, so there was nothing to keep the investigation going," Hopper said. Mateen was not under investigation at the time of Sunday's shooting and was not under surveillance, Hopper said.

An American-born man who'd pledged allegiance to ISIS gunned down 50 people at a gay nightclub in Orlando -- the deadliest mass shooting in the United States and the nation's worst terror attack since 911, authorities said Sunday.

* Mateen called 911 around the time of the attack to pledge allegiance to ISIS and mentioned the Boston bombers, according to a U.S. official.

Mateen carried an assault rifle and a pistol into the packed Pulse club about 2 a.m. Friday and started shooting, killing 50 people and wounding at least 53, police said. After a standoff of about three hours, police crashed into the building with an armored vehicle and killed Mateen.

"It appears he was organized and well-prepared," Orlando Police Chief John Mina said early Sunday. Authorities have not described finding any accomplices.

There has been no claim of responsibility for the attack on jihadi forums, but ISIS sympathizers have reacted by praising the attack on pro-Islamic State forums.

"We know enough to say this was an act of terror and act of hate," President Obama said in an address to the nation from the White House.

While the violence could have hit any American community, "this is an especially heartbreaking day for our friends who are lesbian, gay, bisexual or transgender," he said.

People inside the cavernous nightclub described a scene of panic made more confusing by the loud music and darkness.

Christopher Hansen said he was getting a drink at the bar about 2 a.m. when he "just saw bodies going down." He heard gunshots, "just one after another after another."

The gunshots went on for so long that the shooting "could have lasted a whole song," he said.

Ricardo Negron Almodovar escaped the club and posted this description on his Facebook page: "People on the dance floor and bar got down on the floor and some of us who were near the bar and back exit managed to go out through the outdoor area and just ran."

Before Sunday, the deadliest shootings in U.S. history were at Virginia Tech in 2007 and Sandy Hook Elementary School in 2012, with 32 and 27 killed.

Law enforcement sources told CNN that the suspect had possible explosive devices strapped to his body and in his vehicle, but a U.S. official said later that no explosives were found.

At least nine officers were involved in the shootout, Mina said. Several coroner vans were seen traveling toward the nightclub.

The shooter is not from the Orlando area, Mina said. He has been identified as Omar Saddiqui Mateen, 29, of Fort Pierce, about 120 miles southeast of Orlando, two law enforcement officials tell CNN.

Orlando authorities said they consider the violence an act of domestic terror. The FBI is involved. While investigators are exploring all angles, they "have suggestions the individual has leanings towards (Islamic terrorism), but right now we can't say definitely," said Ron Hopper, assistant special agent in charge of the FBI's Orlando bureau.

Authorities are also looking into the possibility the attack was a hate crime, a law enforcement source told CNN.

The shooting began around 2 a.m., and an officer who was working at the club responded, Mina said. The officer engaged in a shootout outside the club, after which the gunman ran into the club.

"That turned into a hostage situation," Mina said.

Authorities were getting calls from people inside the club but away from the gunman, the chief said.

More police rushed to the scene and broke down a door with an armored vehicle, helping some 30 club-goers flee to safety, Mina said. At that point police shot and killed the gunman, he said.

"It's just shocking," said Christopher Hansen, who was inside Pulse. He heard gunshots, "just one after another after another. It could have lasted a whole song," he said.

Hansen was getting a drink at the bar when he "just saw bodies going down," he said.

When the shots erupted, he hit the ground, crawling on his elbows and knees, before he spotted a man who had been shot.

"I took my bandana off and shoved it in the hole in his back," Hansen said, adding that he saw another woman who appeared to be shot in the arm.

The nightclub posted on its Facebook page shortly after the violence began: "Everyone get out of Pulse and keep running."

Orlando police warned residents to stay away from the area, and urged people not to call their offices. They declined to provide the number of casualties, saying details will be available later. Bomb sniffing dogs are on the scene.

Pulse describes itself as "the hottest gay bar" in the heart of Orlando. Hours before the shooting, the club urged party-goers to attend its "Latin flavor" event Saturday night.

Jovial, well-dressed crowds heeded the call in an event that turned into a nightmare.

"It was just, bang, bang, bang!" party-goer Hansen said of the gunfire.

Ricardo Negron Almodovar said he was in the club when the shooting started about 2 a.m. He barely escaped.

"People on the dance floor and bar got down on the floor and some of us who were near the bar and back exit managed to go out through the outdoor area and just ran," he posted on the club's Facebook page.

"I am safely home and hoping everyone gets home safely as well."

Anthony Torres, who was at the club, said he and his friends were leaving the club when the shots were fired just after last call, as the club was nearing closing time.

"The shots did not sound like a regular handgun. It sounded like it was shooting repetitively and it wouldn't stop," said Torres, who added that he saw at least 10 people who had been shot.

Tearful relatives waited outside the club as lights from police cars flashed in the background. Some implored the media to help them get word on their loved ones.

'Just a lot of people screaming'

The sound of gunshots echoed beyond the club.

Jose Torres was clocking in to work at a Dunkin' Donuts across the street when he heard them.

"It was something that I never heard before," Torres said. "I had to run inside the store, and I saw just a lot of people screaming, crying. Just screaming and coming out running like crazy."

Torres said he ducked into the Dunkin' Donuts and called 911 as several people dashed out of the club, bleeding. Police and SWAT teams rushed to the scene.

"They don't let nobody in or out," he said. "The SWAT team is inside there."

Authorities have conducted a controlled explosion near the nightclub, according to Orlando police.

Tom Fuentes, a CNN law enforcement analyst, said controlled explosions are used to breach a door or when a subject is barricaded in a room and police want to use a stun grenade to temporarily freeze their central nervous system.

FBI agents were also assisting at the scene, agency spokeswoman Amy Pittman said. President Barack Obama was briefed on the shooting and asked the FBI and other federal officials to provide him with regular updates, a statement said.

Florida Gov. Rick Scott tweeted, "My prayers are with the victims' families & all those affected by the shooting in Orlando. We will devote every resource available to assist."

Authorities urged caution as police officers hovered nearby with weapons and dogs.

A few miles away, the Orlando Regional Medical Center was placed on lockdown, the hospital said in a statement. Only essential workers are being allowed access into the building.

Relatives looking for loved ones were instructed to go to the medical center's north tower with identification. Hospital staff will escort family members with IDs to a family meeting area.

The mass shooting occurred only a few miles from Orlando's Plaza Live theater where 22-year-old singerChristina Grimmie, who had appeared on NBC's "The Voice," was gunned down Friday night.