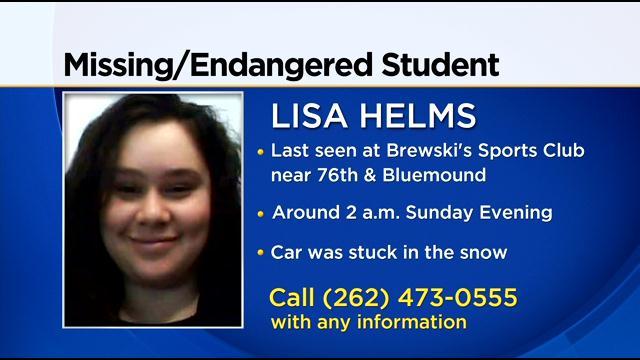 UPDATE as of 9:42 a.m.: Whitewater police confirm Lisa Helms has been found safe. It's unclear where she was located and what condition she is in, but authorities confirm she is safe.

Investigators say 23-year-old Lisa Helms was last seen around 2:30 a.m. Sunday at Brewski's Sports Club near 76th and Bluemound. She stopped at the bar for help after her car became stuck.

Helms is originally from Evansville, WI and her mother says she is diagnosed with Bipolar Disorder.

A vehicle description and other descriptive information about Helms was not immediately available.

Anyone with information on her whereabouts should call Crime Stoppers at (262) 473-0555.
Share this article: