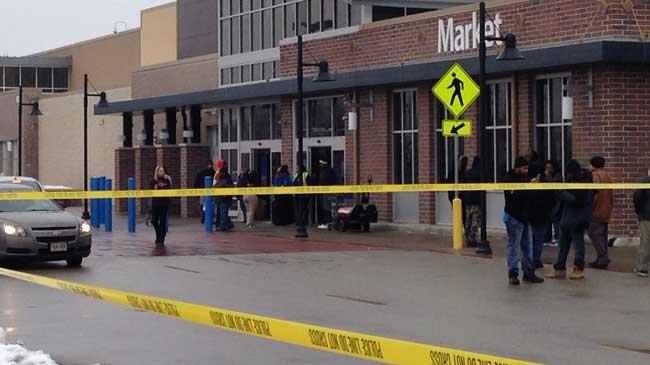 Several victims were severely beaten during a robbery that occurred prior to police pursuit that ended in the crash in Northwest Milwaukee.

The subjects were all 13-year-old males and residents of Milwaukee.  The pursuit covered nearly 15 miles from the southeast to northwest side of Milwaukee.

This morning at about 10:30 a.m., a sheriff’s deputy spotted a vehicle at 14th and Burnham that was wanted in conjunction with a strong-armed robbery from earlier today.

The deputy attempted to stop the vehicle, but the driver fled.  The pursuit ended at a department store parking lot at 107th and Silver Spring where three deputy squads and an MPD squad boxed the vehicle in. The driver subsequently crashed into several of the squads in an attempt to flee again.

The four occupants fled on foot, and three deputies and an MPD officer apprehended all of them.  One of the deputies involved in the foot pursuit just graduated from the Sheriff’s Office Training Academy on Tuesday.  Deputies are searching the route for items discarded by the subjects during the pursuit.

The Sheriff’s Office is issuing felony charges of Fleeing and Recklessly Endangering Safety (RES) in the pursuit incident.  The robbery case is being investigated by the Milwaukee Police Department.

A mother of one of the suspects was at the scene. She calls herself Ms. Evans. She says, "My son is 13. All I can do is sit here and be patient. I'm just praying to the lord, wondering who else is in those vehicles."

ORIGINAL: There is a large police presence at the Walmart on 99th and Silver Spring.

Police including the Milwaukee County Sheriff's Department have the parking lot taped off.

Milwaukee County Sheriff said deputies spotted a car wanted in a robbery earlier today and attempted to stop it. They fled and crashed.

CBS 58 is working on getting more information. Stay tuned.