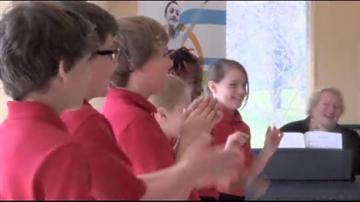 MILWAUKEE -- If you stopped by some local parks Saturday morning you were in for a treat.

Youth performers put on their best show to raise awareness for the arts.

The Milwaukee Children's Choir among those performing at Greenfield Park.

The program, in part, supported by the United Performing Arts Fund or UPAF.

It's success is contingent upon donations and there's a big way to donate coming up that's fun as well.

The annual UPAF Ride for the Arts on June 1st along the lakefront.

The UPAF Ride for the Arts, sponsored by Miller Lite, is one of the nation’s largest one-day recreational bike rides. This annual fundraising event helps to keep the performing arts vibrant in our community. More than 275,000 participants have joined in the Ride for the Arts since it began in 1981, generating more than $8 million in funds to support more than 30 UPAF Member Groups and Affiliates.

Bike helmets are required for all riders.