University of Wisconsin-Milwaukee has 5 Students in Germany 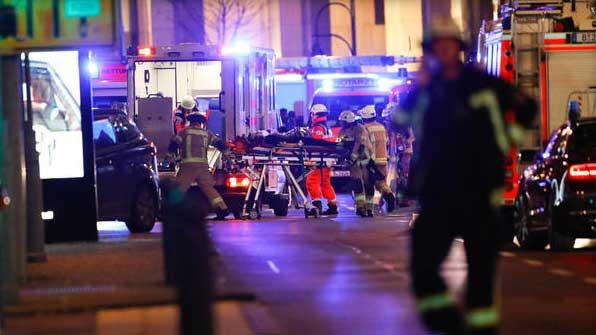 University of Wisconsin-Milwaukee said it has five students in Germany during the possible act of terrorism in Berlin.

A university official said one is located in Berlin, and the student has told the program coordinators she is safe.

Italian Foreign Minister Angelino Alfano says he was "deeply stricken and pained" by the deaths of nine people in Berlin when a heavy truck crashed into a Christmas market.

Though German police say it is too early to call whether the incident was intentional, Aflano refers to as an attack.

In a statement provided by Italy's foreign ministry, Alfano expresses closeness to Germans "in this sad moment that instead should be of joy and peace in the approach to the Christmas holidays."

Alfano says attacks "won't change our determination to combat terrorism" alongside international partners and in particular Germany, saying the two countries are in strict coordination.

Separately, Italy's ambassador in Berlin, Pietro Benassi, told Italian state TV that German authorities couldn't say yet if any foreigners were among the victims.

A Berlin police spokesman says that in addition to the nine dead in a Christmas market about 50 people were injured, including several critically.

Winfried Wenzel told The Associated Press at the scene that among the fatalities was the passenger of the truck, who died as paramedics treated him at the scene. He offered no details on how the passenger was injured.

Wenzel said the truck was registered in Poland, but that police were still investigating where it came from and who the driver is.

The Polish owner of the truck said he feared the vehicle, driven by his cousin, may have been hijacked. Ariel Zurawki said he last spoke with the driver around noon, and the driver told him he was in Berlin and scheduled to unload Tuesday morning.

Zurawki said that "they must have done something to my driver," he told TVN24.

Berlin's top security official, state interior minister Andreas Geisel, told RBB television that it was too early to say whether it was an attack, and said that reports the truck may have been hijacked were "pure speculation."