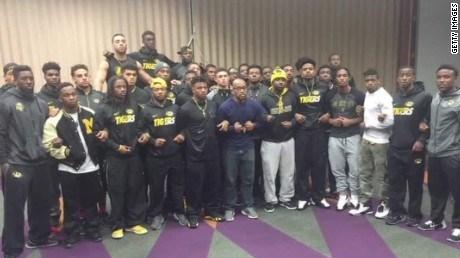 (CNN) Dozens of University of Missouri football players plan to boycott games and practice until the school's president resigns over accusations of mishandling race issues.

About 30 players announced the decision Saturday night in a tweet posted by Missouri's Legion of Black Collegians.

It included a picture of the players and came nearly a week after student Jonathan Butler went on hunger strike to demand the removal of President Tim Wolfe.

In recent weeks, students have accused Wolfe of an inadequate response to racism. In one such incident, a swastika was placed in a dorm, sparking more outrage, students said.

The University of Missouri-Columbia has a population of 35,000 students, 17% of whom are minorities, the campus says on its website.

Wolfe apologized to students Friday, saying he has met campus representatives to seek their input.

"Racism does exist at our university and it is unacceptable," he said in a statement Friday.

"It is a long-standing, systemic problem which daily affects our family of students, faculty and staff. I am sorry this is the case I truly want all members of our university community to feel included, valued and safe."

The university's athletics department said it stood by the students.

"The department of athletics is aware of the declarations made tonight by many of our student-athletes," it said in a statement.

"We must come together with leaders from across our campus to tackle these challenging issues and we support our athletes right to do so."