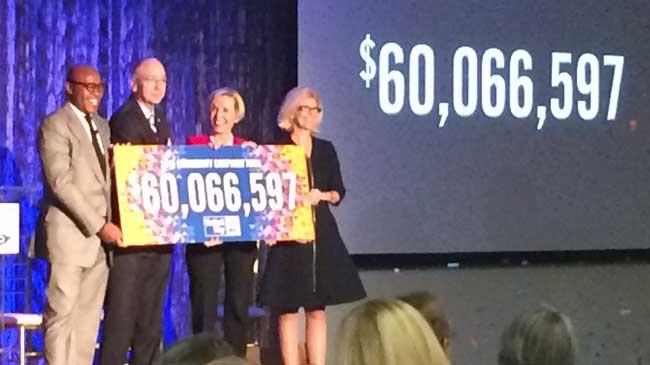 “The steps United Way of Greater Milwaukee & Waukesha County and its community took to merge their organizations continue to be a model for United Ways across our worldwide network,” said Brian Gallagher, president and CEO, United Way Worldwide.  “Importantly, it means increased capacity to address this community’s most pressing challenges, deeper and more strategic community partnerships, and ultimately greater opportunity to create long-term change.”

In response to the increased capacity of the organization, Johnson Controls, Inc. announced, beginning in 2016, $1 million dollars over three years to fund the new Johnson Controls Volunteer Engagement Center.

“The new center will expand upon the already existing United Way volunteering programs to focus on additional ways for corporations, individuals and families to give back to our community through the gift of volunteering.” said Mary Lou Young, president & CEO of United Way of Greater Milwaukee & Waukesha County.  “We are very grateful for the continued support from Johnson Controls, Inc.”

The monies raised will impact 1 in 4 people in Milwaukee, Ozaukee, Washington and Waukesha Counties through the support of 220+ programs at more than 110 agencies.

“Throughout the campaign our motto has been ‘1 + 1 must equal 3’ and the community has proven this to be true with their tremendous support,” said campaign co-chair, Cory Nettles, partner – of counsel at Quarles & Brady, LLP. “These successes will continue to allow United Way to do the important work of being a convener – bringing together teachers, parents and community volunteers who are focused on helping our kids succeed.”

“One in four people in our four county region count on United Way services and the need is always increasing,” said Suzanne Kelley, campaign co-chair and president of the Waukesha County Business Alliance. “Surpassing the goal of raising $60 million ensures that families will have access to help when they need it most.”

Catherine Jacobson, campaign co-chair and president and CEO of Froedtert Health noted that, “Results create hope and results like these will do more than create hope, they will inspire and create change in our community – like the change we’ve seen in the teen pregnancy and infant mortality rates.”

“United Way has the expertise, the infrastructure and systems in place to create long-term social change. It’s amazing to see what can be accomplished when citizens and corporations get involved and come together to make a difference,” said Alex Molinaroli, campaign co-chair, chairman, president & CEO of Johnson Controls, Inc.

“It’s the people behind United Way that make all the difference – it’s in our name.  CEO’s, teachers, parents, healthcare workers, and top bankers all come together to live united and help others,” said Mary Lou Young, president & CEO of United Way of Greater Milwaukee & Waukesha County.  “When diverse people and groups work together to overcome something – we can drive measurable, lasting impact that none of us can achieve alone. I’m incredibly proud of what our community has done here and look forward to the change it will create.”