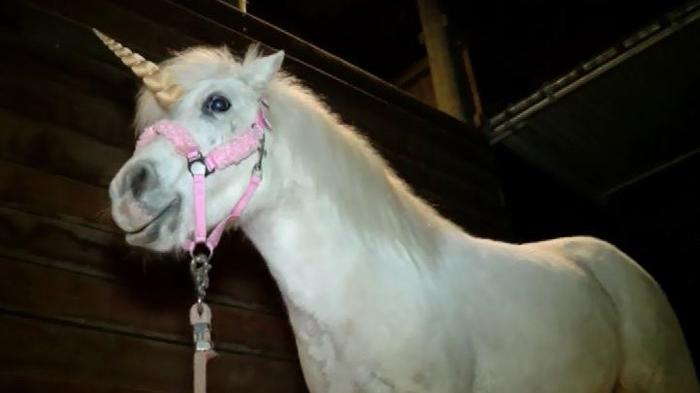 Fresno, Calif. (KPGE) Residents of one California community couldn't believe their eyes when they saw what they thought was a tiny unicorn roaming the area.

The pretty pony wasn't quite what people thought, but she did lead police on a chase they won't soon forget.

Juliette, who belongs to a 5-year-old Tatum Boos, looks more like something you'd find in a fairytale than on a farm.

The horn on Juliette's head makes a child's dreams come true she appears to be a real life unicorn that makes a living posing for pictures.

On Wednesday she ran away from her handler.

People driving down Avenue 12 in Madera Ranchos called 9-1-1 reporting a unicorn running around.

"The calls were coming in as a unicorn running around out there on the roadway," said Officer Josh McConnell, California Highway Patrol.

"She was running a muck in a couple of orchards with some white blooms so she kind of blended in with the scenery as well and she's not real tall so she turned out to be stealthier than we imagined," said Sandra Boos, Tatum’s mother.

The highway patrol used a CHO helicopter to shine its spotlight during the night to help with the search.

"The call came out "the unicorn was in custody" and I think as tense as the situation was I think it was the comedic relief that was needed at the time and I laughed and I cried and I thanked God,' said Sandra Boos.

With nobody hurt it's a fairytale ending for this pony, but according to Tatum she has some explaining to do

"She got a time out because she was being a bad pony," said Tatum.