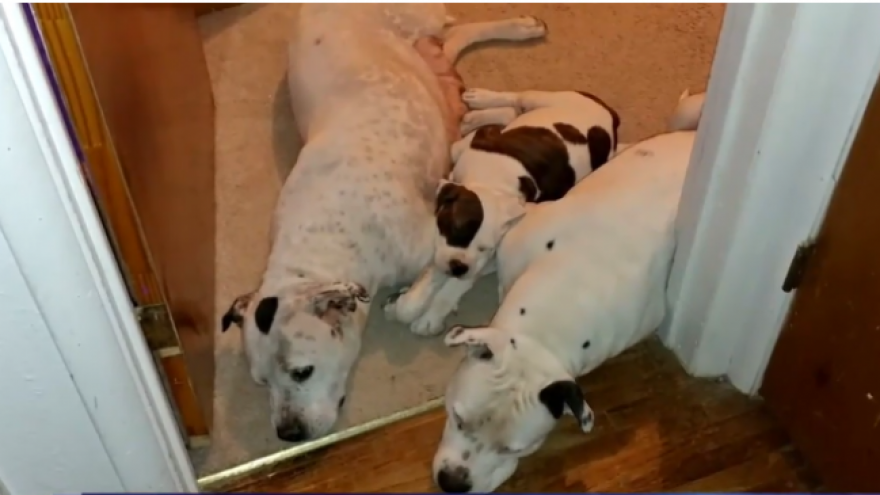 ORCHARD MESA, Colo. (CNN/KKCO)-- The Mesa County Sheriff's Office said the case of two dogs found decapitated near a railroad track in Orchard Mesa is now being treated as a case of animal abuse.

Deputies said the two pit bulls, BB and Calypso, went missing from their owner’s home earlier on April 15. According to a case report, the dogs were let out into the backyard to go to the bathroom, when they hopped the fence and escaped the yard.

On Wednesday, the two dogs were found decapitated near train tracks in Orchard Mesa. They were discovered by a couple walking in the area, according to the case report.

The sheriff's office said the dogs were not tied down to the tracks, and there was no evidence of any rope nearby.

George and Christin Ormond who owned the dogs said they are distraught. They added they were the best dogs and companions anyone could have.

\"The next morning when I woke up, they weren't at the front door,\" George said.

The report said the couple found the dogs in the middle of the train tracks. They moved them to the side of the tracks so they weren’t further mutilated by a train.

\"It was such an unimaginable scene,\" said Christin.

The family says they believe someone is responsible for this violence.

The Mesa County Sheriff’s Office said it has no suspects and no evidence on how the dogs were killed.

While reeling from this tragedy, the family reminisces about the good times with their two beloved pets.

\"BB would sit at our front door every morning and wait for our daughter to get on the school bus and wouldn't leave the window until she was on the bus,” Christin said.

The Sheriff’s Office is asking if anyone from the community has any information on how the pets could have died.

The sheriff's office said dog owners should make sure pets are fenced up.

The family is looking into video surveillance of the tracks from Union Pacific.