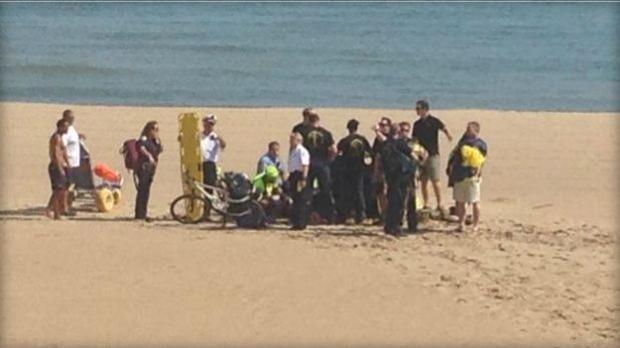 CHICAGO -- Two parachutists performing in the Chicago Air and Water Show Saturday morning were injured after a possible mid-air collision and transported to a hospital in serious-to-critical condition, CBS station WBBM reported.

The Chicago Fire Department said one parachutist with the U.S. Navy Leap Frog team landed in front of the boathouse at North Avenue Beach and was transported to a hospital in serious-to-critical condition and suffered a broken leg.

Another parachutist with the U.S. Army Golden Knights deployed his emergency chute and possibly hit a building in the Gold Coast neighborhood near Schiller and Lake Shore Drive. He was also transported in serious-to-critical condition.

A woman who lives in the Gold Coast told WBBM she ran to her window after she saw a parachute float past. She said at first she thought it was a dummy because his body was limp.

Representatives for the Army and Navy parachute teams did not respond to email and voicemail messages seeking comment.

Members of the Navy team are active-duty personnel drawn from forces including the Navy SEALs. Jumpers can reach speeds of up to 180 mph during freefall by pulling their arms to their sides.

They typically open their parachutes at around 5,000 feet, joining their canopies together in formation and setting off smoke grenades to send red smoke trailing behind them.