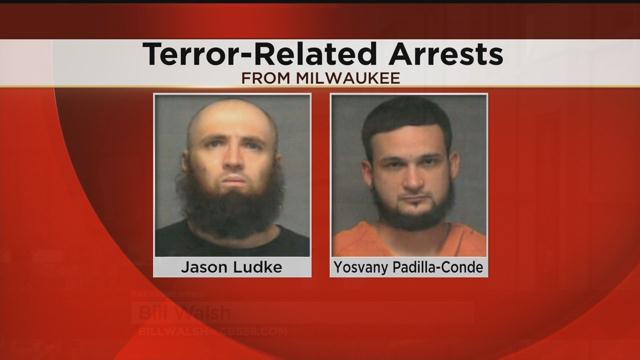 Two Milwaukee men are charged with attempting to support ISIS.

According to the criminal complaint released Friday, they allegedly made videos showing their support for ISIS.

Ludke was charged in a criminal complaint with attempting to provide material support or resources to a foreign terrorist organization, ISIL, in violation of Title 18.

Padilla-Conde was charged with aiding and abetting LUDKE's attempt to provide material support or resources to a foreign terrorist organization, ISIL, in violation of Title 18.

Ludke and Padylla-Conde were arrested by the FBI and local law enforcement near San Angelo, Texas.

It is alleged in the complaint that the two were traveling from Wisconsin to Mexico where they intended to acquire aid and documents necessary to travel to Syria and/or Iraq.

Special Agent in Charge of the FBI, Justin Tolomeo stated “Terrorism remains the FBI’s top priority in keeping Americans safe. The arrest of these two individuals from Wisconsin, underscores how the real threat of terrorism can occur anywhere, at anytime. I would like to commend the efforts of the JTTF which includes a wide range of our law enforcement partners who work tirelessly for the safety of our citizens. We encourage all citizens to remain vigilant in reporting suspicious activity to law enforcement.”

This case was investigated by the Federal Bureau of Investigation and the Joint Terrorism Task Force. The case will be prosecuted by Assistant United States Attorney Paul L. Kanter.