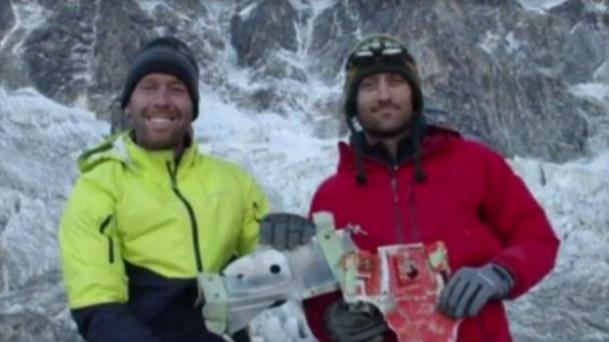 (CBSNEWS) SOMERVILLE, Mass. -- Dan Futrell had an idea so out-there, it might just have been possible: solve a great plane crash mystery by finding the wreckage, CBS Boston reports.

As Futrell and his friend Isaac Stoner watched the search for the missing Malaysian airliner on TV, Futrell looked up other plane crashes. He read about the unsolved crash of Eastern Airlines Flight 980 into the side of Bolivia’s Mount Illimani in 1985. With no black box or bodies found, there were plenty of conspiracy theories.

“In the column that says ‘reason it was not found’ was high altitude and inaccessible terrain,” said Futrell. “And, in my head I went ‘what the…”

The two friends set off earlier this year to find what no one else had. They found the debris field about 1,000 feet below the believed crash site. They think melting glaciers revealed much of the wreckage.

In a video Stoner took on the trip, he said into the camera, “We found human remains, gave them a proper burial, found a million other plane parts.”

Among the plane parts were six pieces of the black box, which is really orange. They found their holy grail -- part of the voice recording -- stuck in the ice. They brought it back the U.S. and the feds’ first response was not what they expected.

“You effectively violated international law. We advise you to send it back to Bolivia,” said Stoner.

They had traveled too far. They went on a campaign to get Bolivia interested, and give the OK for the National Transportation Safety Board (NTSB) to take a look. This week, the two said the agency finally reached out saying they could see what, if anything, is on the tape.

As Futrell and Stoner wait, their journey alone has already provided closure for the families.

“All of them at the end essentially said, ‘Hey, thanks for doing that,’” said Futrell.

They said the NTSB is picking up the black box in the first week in January.