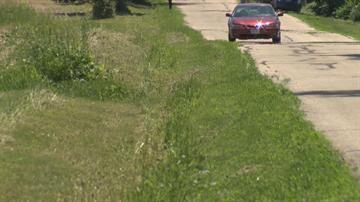 TOWN OF GENEVA -- Thursday afternoon, Diane McCarten tried to pull into her driveway on North Como Road, only to be turned away by police.

\"I could see a truck parked and a lot of squads down there, but we had no idea what was going on until the investigator came later,\" McCarten said.

Earlier that day, highway crews found two suitcases in a ditch.  They moved the cases to continue mowing.  A few hours later, someone called to report the cases were still there.  Police arrived, opened the cases and found a body in each one.

Town of Geneva Police Chief Steve Hurley says it's been years since the town needed to investigate a death.

\"it's very out of nature for the town to have something like this happen,\" Hurley said.  \"The guys are handling it very professionally.  We're a small department, so we rely heavily on the assistance of other jurisdictions.\"

The Waukesha County Medical Examiner's Office conducted autopsies Friday to find out who the victims are and how they died.

\"It did not occur at that location, so they can rest easy knowing that,\" Hurley said.

No one has been reported missing in the area, so police notified local and national missing person databases immediately.  Chief Hurley hopes to find out the age, sex and identity of the bodies soon.

\"Hopefully the community realizes it can happen anywhere,\" Hurley said.

Something Diane McCarten never expected to learn herself.

\"This shouldn't happen in our neighborhood,\" McCarten said.  \"I think that's where everybody's at right now.\"

The police chief expects to know some info about the victims by Monday.  In the meantime, he's hoping anyone who saw or heard something about this crime contacts police.  You can do so by calling 262-248-9926 or anonymously online via this link.