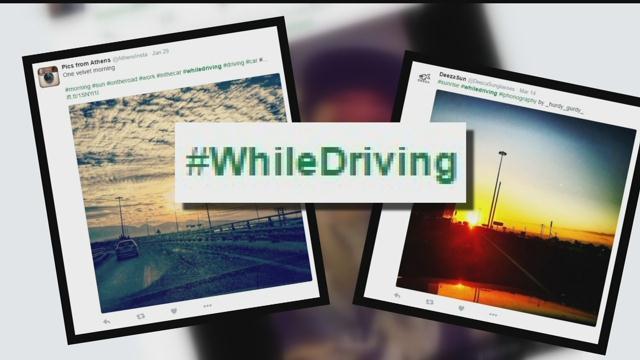 When you're headed to work and get stuck in construction traffic you might not want to reach for that iPhone.

Under a new law Wisconsin now bans most use of cell phones in construction zones.

The month of April is Distracted Driving Awareness Month and in honor of that one insurance firm has been using social media to look at the bad habits of people behind the wheel specifically when they are using their cell phones.

It was really a simple search of public social media posts including #whiledriving - a keyword indicating that someone is describing or posting a picture of themselves doing something while driving.

It's not a new trend - people posting landscapes and sunrises while going who knows how fast on the highways - but it sometimes becomes a bragging contest for distracted driving (like one twitter poster who boasted about peeling a clementine at 60 miles and hour then taking a picture no hands on the wheel).

Doug Smith, Senior Vice President of Personal Lines, said distractions like those featured in the social media posts can be divided into different categories.

"Visual distraction - and this of course occurs when your eyes are not on the road. Perhaps you're looking at a phone or a landscape. The second type would be a manual distraction where your hands aren't both completely on the wheel. So perhaps your actually using a phone to take a photo or you're posting it while you're driving," Smith said.

"And the third one is cognitive distraction where your mind and your thoughts are elsewhere. And we know that from previous research that simply just one of those three can be enough to lead to a fatal crash," Smith said.

But does creating laws against cell phone use actually stop distracted driving?

A potential reason: people might try to use their phone in their laps which may be more dangerous, Smith said.

If you get caught using your cell phone in a construction area in Wisconsin a first offense carries a fine between $20 and $40. Cell phone use is still allowed to be used in emergency situations.