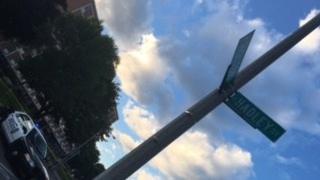 A twelve year old shot as he sat in a car in Riverwest, it happened on North Holton near Hadley Street.

Police say he will be okay. Milwaukee police say someone rode by and shot at the car that a group of boys were sitting in.

In fact no one did.

Police say somebody drove by shot up this car leaving bullet holes in the back door and a 12 year old boy injured.

“More than likely he was sitting in the back next to the boy. I don’t know how many individuals were in the car at the time for the shooting. All I know is my son was one of them,” says Isabel Jackson, the witness’ mother.

“I hope my little brother learns from this because I don't want to be a sister that loses they brother,” says Nadia Fonseca, the witness’ sister.

We talked to people who say they know the 12 year old victim off camera. They say he lives in this house - where the car was parked.

A few people on the porch were taken in handcuffs.

“It’s a disgrace to our younger children that they have to live through all of this violence, and they have to see and go thought this. Nobody's children should have to go through this,”

However, both Jackson and her daughter say they're happy it wasn't worse.

“I thank God, by the grace of God, God is good. Even though somebody still got hurt, I am praying that he's going to make it and he's going to be okay,” says Isabel Jackson.