Tutus and bicycles, UPAF Ride for the Arts 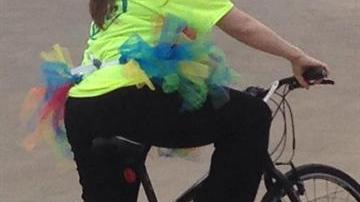 MILWAUKEE-It's that time of the year again to hop on the bicycle and raise money for the United Performing Arts Fund.

Because we're talking about the arts they have a whole bunch of creative ways to get you to get it in gear.

Heather Crouse of First Stage has volunteered for several years.

\"We are the downtown century co-captains,\" she explained to CBS 58 News, \"which sounds like a really fancy title. But we're coordinating all the volunteers in downtown and Third Ward areas.\"

Crouse and her fellow volunteers are known for their colorful costumes along the route as they cheer on the riders.

\"We have added what we fondly call waist wear. Last year it was tutus. And this year you'll just have to come and see what we have in store for you.\"

The ride is celebrating more than three decades, and offering several different routes from five miles to 66.

The idea is to have fun enjoy the natural landscape and preserve the arts in our community by raising money for 15 member groups who might otherwise go silent or dark were it not for the cyclists who bring a sense of community full circle.

\"Milwaukee as our community is such a strength for our city,\" said volunteer Nicole Weeks.  \"Just to support what we can do just to keep that alive. Really it's so important to keep it going.\"