Trump: 'We should just cancel the election' and Declare Me the Winner 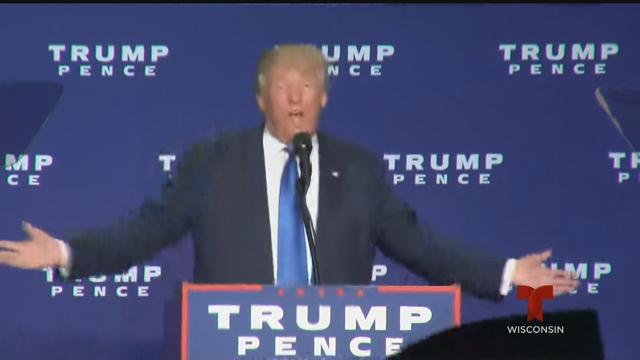 Toledo, Ohio (CNN)Donald Trump, trailing his opponent in key battleground states polls less than two weeks from Election Day, said Thursday he'd like to "cancel the election" and be declared the winner.

"Just thinking to myself right now, we should just cancel the election and just give it to Trump," the Republican presidential nominee said during a rally here on Thursday.
"Her policies are so bad. Boy, do we have a big difference," he added of his Democratic rival Hillary Clinton.
The apparently lighthearted comment falls against the backdrop of Trump's repeated and serious questioning of the legitimacy of the presidential election in recent weeks as he has tumbled in the polls.
Trump has called the election "rigged," argued that the media and establishment politicians are conspiring to sink his campaign and warned supporters that the presidency could be stolen from them due to voter fraud -- instances of which are extremely rare.
Trump is trailing Clinton in national tracking polls and in key battleground states, and its unclear how Trump can amass the Electoral College votes needed to win the presidency if polls hold where they are through Election Day.
Trump's comments about the election also came as he mocked Clinton as "low energy" for the second time in as many days, even polling the crowd to ask them if they think Clinton or his GOP primary foil Jeb Bush is more "low energy."
"Who is more low energy, Jeb Bush or Hillary Clinton?" Trump asked the crowd, re-upping a question he said Fox News host Bill O'Reilly asked him earlier in an interview airing Thursday evening.
"Hillary!" replied most of the crowd.
Trump had repeatedly mocked Bush, the very early favorite to win the GOP presidential nomination, as "low energy" during the primary contest and has repeatedly argued that Clinton does not have the "strength or stamina" to serve as president. On Thursday, he referred to her as "very low energy."
Share this article: