Trump travel ban: Here's what you need to know 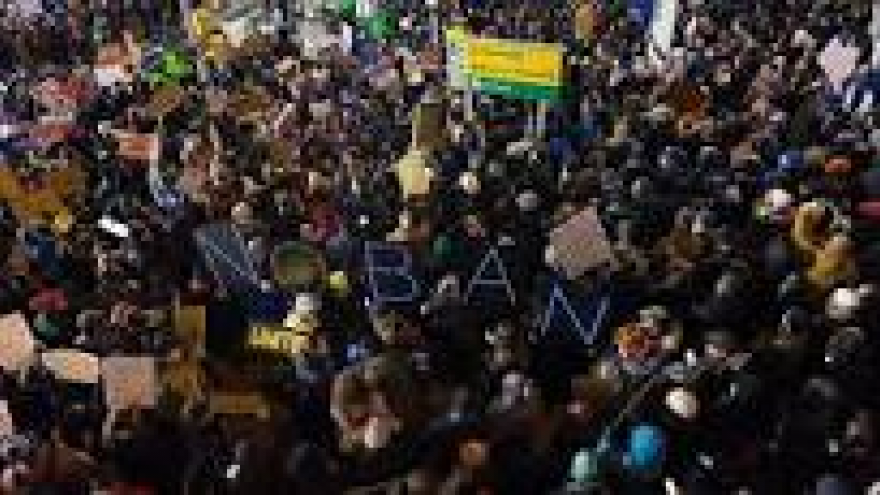 (CNN)It was a wild couple of days of chaos and confusion after President Trump signed his travel ban. Not up to speed on what went down over the weekend? Here's a quick primer.

President Trump signed an executive order Friday night to keep refugees from entering the country for 120 days and immigrants from seven predominantly Muslim nations out for three months. The countries affected are Iran, Iraq, Syria, Sudan, Libya, Yemen and Somalia. This is the "extreme vetting" Trump promised during the campaign, but it still seems to have caught folks by surprise.

Team Trump apparently never ran the order by officials at the Justice Department. Homeland Security officials weren't given much guidance about how the order would be implemented or enforced. Thus the confusion and chaos.

The ban snared green card holders and people with valid visas alike. Some travelers who were in the air when Trump signed the order weren't able to enter the country when they landed. Some were detained. Others were sent back to where they flew in from. Lawsuits began to fly and by Saturday night a federal judge had temporarily and partially blocked Trump's order.

How big is the backlash?

It's global. Hundreds showed up at airports across the country -- from New York to Atlanta to Dallas to Seattle -- to protest. Vocal crowds against the order gathered outside the White House.

Foreign leaders slammed the ban. UK Prime Minster Theresa May said "we do not agree with this kind of approach." German Chancellor Angela Merkel called Trump herself and reminded the President of the United States' obligations to refugees under the Geneva Conventions. London Mayor Sadiq Khan called the ban "shameful and cruel."

Canadian Prime Minister Justin Trudeau tweeted that refugees were welcome in Canada. Even some members of the President's own party joined in the melee. Sens. John McCain and Lindsey Graham said the ban would only help ISIS and other militant groups recruit more terrorists. Ohio GOP Sen. Rob Portman said Trump's so-called extreme vetting program "wasn't properly vetted." Most of the rest of the GOP was silent.

CNN's Fareed Zakaria said the victims of the ban were the "roadkill of Trump's posturing." A petition to stop Trump's planned state visit to Britain has nearly 1 million signatures.

That's the million-dollar question. Presidents have broad power in shaping immigration policy, but many critics feel parts of Trump's order are unconstitutional and discriminatory. There's already been pushback from the courts.

A federal judge in New York granted an emergency stay for citizens of the countries included in the ban and rules they can't be removed from the United States. A federal court in Washington issued a stay stopping travelers being detained there from being sent back to their home country. Federal judges in Boston ruled officials can't detain a person on the basis of Trump's executive order.

The Department of Homeland Security said on Sunday it will comply with judicial orders not to deport detained travelers.

Why those seven countries?

The Trump administration pointed the finger at former President Obama. White House officials said the seven countries targeted in the executive order had already been deemed "countries of concern" for terrorism by the Obama administration. In December 2015 Obama signed into law a measure placing some restrictions on certain travelers from Iran, Iraq, Sudan or Syria. A couple of months later, Libya, Somalia and Yemen were added.

Trump's order is more broad than Obama's, though, banning all citizens from those seven nations from entering the country for three months. Many were quick to point out that although Trump has brought up 9/11 as part of the justification for keeping people from certain countries out, none of the countries where the 9/11 hijackers came from -- Saudi Arabia, Egypt, the United Arab Emirates and Lebanon -- was on the list.

How are businesses and colleges affected?

There's panic in some US colleges and universities that have a large number of foreign students. Some students and faculty members fear they'll have to decide between careers or families. Some raced back to the United States as the executive order loomed, so they would be able to complete a degree. Now they're left to wonder when they'll get to see their families again if they remain in the United States.

There's hardship for those who planned to come to the States as well. Mahmoud Hassan, an 18-year-old Syrian in Damascus, accepted an offer to attend MIT earlier this year, but because of the ban, he said his "dreams are basically ruined."

Trump's order sent shock waves through the business world, too, especially the tech industry. Apple CEO Tim Cook denounced the executive order and promised to help employees affected by it, adding that without immigration "Apple would not exist." Google warned employees with a visa or green card from one of the banned countries to cancel any travel plans. Facebook's Mark Zuckerberg said the United States needs to keep its citizens safe, but should focus on "people who actually pose a threat."

More lawsuits against the executive order are a near certainty. But the White House is also considering asking foreign visitors to disclose all the websites and social media sites they visit, as well as sharing all the contacts in their cellphones. If the visitor declined to share such information, that person would be denied entry to the United States. This idea is still just being kicked around by administration officials and no one knows just how such a policy, if enacted, would work.

One thing's for sure: Despite the outcry, Trump is moving full steam ahead with his order. Over the weekend he said he felt the implementation of the order "was working out very nicely." He later vigorously defended his executive order, saying it was not a Muslim ban but a move that would keep the United States safe from terrorists. The President said while there's "compassion to those fleeing oppression," his first priority was to keep the nation safe.