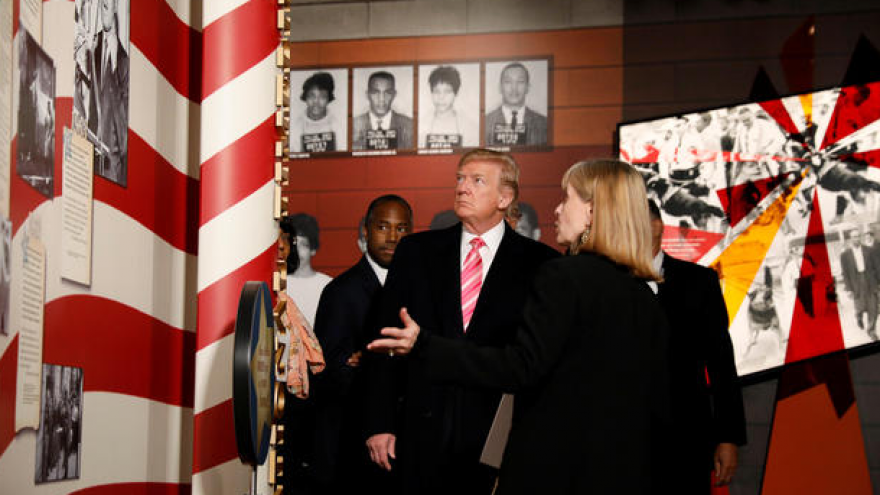 President Trump on Saturday toured and delivered brief remarks at the opening of the Mississippi Civil Rights Museum in Jackson in a visit that did not come without controversy.

"These buildings embody the hope that has lived in the hearts of every American for generations," Mr. Trump said. "The hope for a future that is more just and is more free."

Mr. Trump, speaking after he toured the museum, said it highlights the "injustice" leveled against the African-American community, and the efforts to fight for equality.

But the president's visit was criticized by black leaders. The NAACP urged Mr. Trump not to attend, and two African-American Democrats in Congress -- Rep. John Lewis of Georgia and Rep. Bennie Thompson of Mississippi -- canceled their trip. In a joint statement issued Thursday, Lewis and Thompson called the president's presence an "insult."

"President Trump's attendance and his hurtful policies are an insult to the people portrayed in this civil rights museum. The struggles represented in this museum exemplify the truth of what really happened in Mississippi," they wrote. "President Trump's disparaging comments about women, the disabled, immigrants and National Football League players disrespect the efforts of Fannie Lou Hamer, Aaron Henry, Medgar Evers, Robert Clark, James Chaney, Andrew Goodman, Michael Schwerner and countless others who have given their all for Mississippi to be a better place. After President Trump departs, we encourage all Mississippians and Americans to visit this historic civil rights museum."

Before the president's visit, the NAACP help a press conference in which NAACP President and CEO Derrick Johnson said the NAACP would "refuse to give a big picture to an individual who don't care about our voting rights and seeks to suppress it."

The controversy was so intense that Mr. Trump spoke at a private event instead of at the main ceremony, and left after he delivered his remarks, instead of sticking around for the ribbon-cutting ceremony.