Trump says federal social distancing guidelines will be 'fading out' 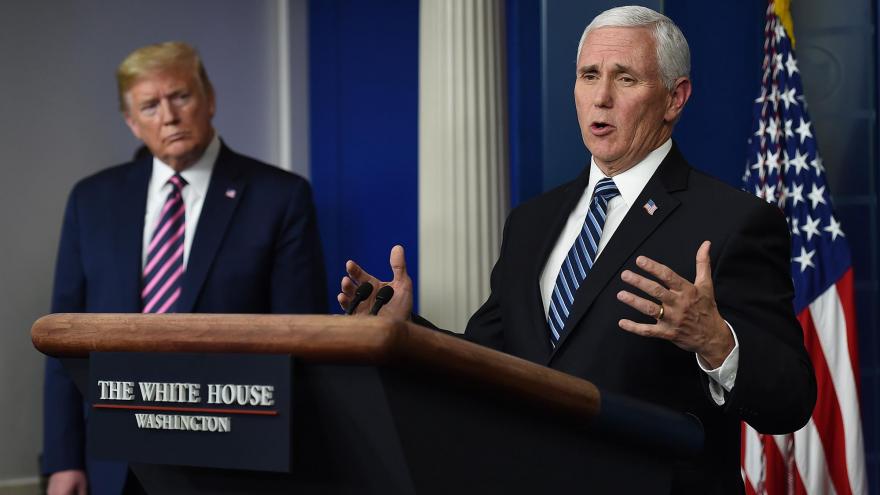 President Donald Trump listens as US Vice President Mike Pence speaks during the daily briefing on the novel coronavirus, which causes COVID-19, in the Brady Briefing Room of the White House on April 24, 2020, in Washington, DC.

(CNN) -- A day before federal guidelines on slowing the spread of coronavirus are set to expire, Trump administration officials signaled that the strong federal social distancing guidelines would be relaxed as states begin to reopen their economies.

"Frankly, every state in America has embraced those guidelines at a minimum, or even done more, and now our focus is working with states as governors, like Gov. John Bel Edwards, unveil plans to open up their states again," Vice President Mike Pence said as he and other task force members met with President Donald Trump and Edwards, a Democrat, in the Oval Office Wednesday.

Trump added that the current guidelines will be "fading out," as states begin to reopen.

"I am very much in favor of what they're doing," Trump said of governors who are opening businesses. "They're getting it going."

"The new guidance that we've issued is guidance for how they can do that safely and responsibly," Pence added.

Dr. Deborah Birx, also in the meeting, said that the administration has been "very encouraged to see how the federal guidelines have helped inform, or at least provide a framework for governors and moving forward."

There have been more than 1 million confirmed coronavirus cases in the US and nearly 60,000 fatalities so far, according to Johns Hopkins University.

Trump, who initially introduced the guidelines in mid-March, later extended nationwide social distancing guidelines for another 30 days at the end of the month, an abrupt back-down from his push at the time to reopen the country.

The 15-day guidelines Trump announced two weeks prior were set to expire, and the President had suggested that he was looking to relax them, at least in some parts of the country. He even floated Easter, on April 12, as a potential date by which the country could return to normal before ultimately backing down.