Trump questions McCain's bravery, says 'he is not a war hero' 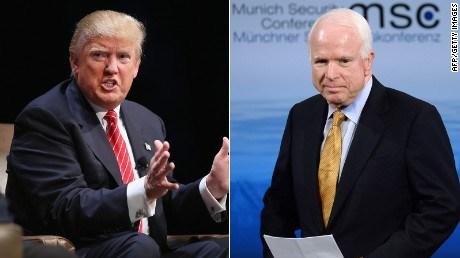 WASHINGTON (CNN) -- Donald Trump ignited a political firestorm Saturday by questioning whether Sen. John McCain -- who spent over five years as a prisoner during the Vietnam War -- is a war hero.

By mid-afternoon, Trump tried to walk back his blunder on Twitter, saying \"captured or not, all our soldiers are heroes!\"

But his attempt at damage control seemed unlikely to diminish the anger his remarks had caused. They provoked an immediate outcry from his 2016 presidential rivals and the Republican National Committee, which has expressed concern about the impact his controversial remarks on immigration have had on the GOP brand.

For Republicans waiting to pounce on Trump and knock him from his position as the party's leading presidential candidate, the real estate mogul may have handed them an opening.

The controversy began early Saturday afternoon, when Trump, speaking at a question-and-answer session at the Family Leadership Summit in Ames, Iowa, commented on McCain, with whom he's recently feuded over illegal immigration.

\"He is not a war hero,\" Trump told pollster Frank Luntz, who was hosting the session.

\"He is a war hero,\" Luntz interjected.

The comments met with a mix of gasps, boos, laughter and some applause from an audience.

McCain, a Naval aviator, was shot down in 1967 over North Vietnam and fractured both arms and legs after being ejected from his aircraft. He was repeatedly tortured during his stay in the notorious \"Hanoi Hilton\" -- and refused early release when the North Vietnamese learned his father was a Navy admiral -- until he finally returned home in 1973 following the Paris Peace Accords.

The Arizona senator, who has limited mobility in his arms following his war experience, received the Distinguished Flying Cross, a Silver Star and a Purple Heart for his service.

Trump, meanwhile, received several deferments during the war. According to The Smoking Gun, which obtained selective service records for Trump in 2011, he received four student deferments between 1964 and 1968, and later a medical deferment in 1968.

McCain spokesman Brian Rogers told CNN that the senator would have no comment on Trump's statements.

\"His attack on veterans make him unfit to be Commander-in-Chief of the U.S. Armed Forces, and he should immediately withdraw from the race for President,\" he added in a statement.

\"Enough with the slanderous attacks. @SenJohnMcCain and all our veterans - particularly POWs have earned our respect and admiration,\" he tweeted.

South Carolina Sen. Lindsey Graham, a close friend of McCain's, fired off a series of tweets criticizing Trump and questioning his qualifications to be president in light of the comments.

McCain's daughter, Meghan, tweeted that she was \"horrified\" and \"disgusted\" by the remarks.

But while Texas Sen. Ted Cruz -- who has stood out in the 2016 field as a supporter of Trump's controversial remarks on immigration -- defended McCain in a tweet, he notably declined to criticize Trump when asked by reporters to comment on the real estate mogul's remarks. Instead, he blamed the media for trying to turn Republicans against each other.

Sean Spicer, the communications director for the Republican National Committee, said in a statement that McCain \"is an American hero because he served his country and sacrificed more than most can imagine. Period.\"

\"There is no place in our party or our country for comments that disparage those who have served honorably,\" Spicer added.

Speaking to reporters after the event, Trump sought to clarify his comments.

\"If a person is captured, they're a hero as far as I'm concerned,\" Trump said. \"But you have to do other things also. I don't like the job John McCain is doing in the Senate. He's not taking care of our veterans.\"

His campaign also released a statement, in which Trump said McCain has done \"little\" for U.S. veterans.

\"I am not a fan John McCain because he has done so little for our veterans, and he should know better than anybody what the veterans need, especially in regards to the (Department of Veterans Affairs),\" Trump said in the statement. \"He is yet another all-talk, no-action politician who spends too much time on television and not enough time doing his job and helping the vets. He is also allowing our military to decrease substantially in size and strength, something which should never be allowed to happen.\"

This is not the first time Trump has taken a jab at the 2008 Republican nominee this week.

After McCain criticized Trump's visit to Phoenix last weekend, saying he \"fired up the crazies\" in regard to his controversial comments on illegal immigration, Trump called the Arizona senator a \"dummy\" on Twitter.

\".@SenJohnMcCain should be defeated in the primaries. Graduated last in his class at Annapolis--dummy,\" he said.

In his campaign's statement on Saturday, Trump again referenced illegal immigration as the main reason for his feud with McCain.

\"Furthermore, he was extremely disrespectful to the thousands upon thousands of people, many of whom happen to be his constituents, that came to listen to me speak about illegal immigration in Phoenix last week by calling them 'crazies,'\" the statement said. \"These were not 'crazies' -- these were great American citizens.\"

Trump supported McCain's presidential candidacy in 2008. He donated $28,450 to John McCain's Victory Committee, a super PAC, and endorsed him on CNN's \"Larry King Live\" that year, calling him \"a smart guy and I think he's going to be a great president.\"

During Saturday's Q&A session, Trump claimed he raised $1 million for the Arizona senator. After the event, Trump added on Twitter that McCain \"let us down by losing to Barack Obama in his run for President!\"