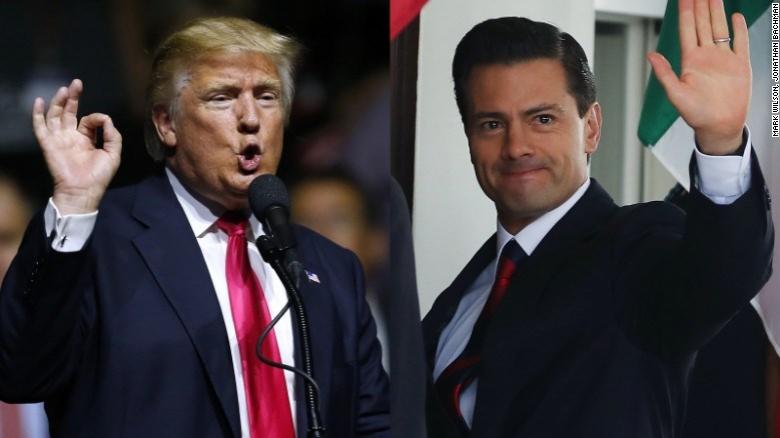 (CNN)Donald Trump announced Tuesday night that he will meet Wednesday with the President of Mexico just hours before he is set to deliver a speech focused on immigration policy.

"I have accepted the invitation of President Enrique Pena Nieto, of Mexico, and look very much forward to meeting him tomorrow," Trump tweeted as reports swirled that Trump was mulling a last-minute trip to Mexico.The office of the Mexican President confirmed in a tweet late Tuesday night that Trump had accepted Peña Nieto's invitation and that the two will meet privately on Wednesday.

"In the past days, the President @EPN invited both U.S. presidential candidates to a dialogue on the bilateral relations between Mexico and the United States. Mr. @realDonaldTrump has accepted the invitation and will meet tomorrow in private with the President @EPN."A meeting between Trump and Peña Nieto would be extraordinary, given Trump's continued pledges to build a wall on the border with Mexico and make Mexico pay for it. Trump has also stoked fierce criticism in Mexico and in the Hispanic community at large for his at-times inflammatory rhetoric in discussing illegal immigration.

The Washington Post first reported Trump was mulling a meeting with Peña Nieto before Trump confirmed it.

At a Tuesday night rally, Trump stuck to his tough-talking rhetoric.

"We are also going to secure our border and stop the drugs from pouring in and destroying our country. And I'll be talking about that tomorrow night in Arizona, big speech on immigration," he said in Everett, Washington.The visit follows months of warring words between Trump and Mexico's leaders, including when Peña Nieto compared Trump to brutal dictators Adolf Hitler and Benito Mussolini.

But both Trump and Peña Nieto have publicly expressed a willingness in recent weeks to meet with one another.

"Mrs. Hillary Clinton and Mr. Donald Trump, I would like to express to both of them my greatest respect, my deepest respect. And from right now, I propose going into a frank, open dialogue with whomever is elected," Peña Nieto said in July during a joint news conference with President Barack Obama at the White House.