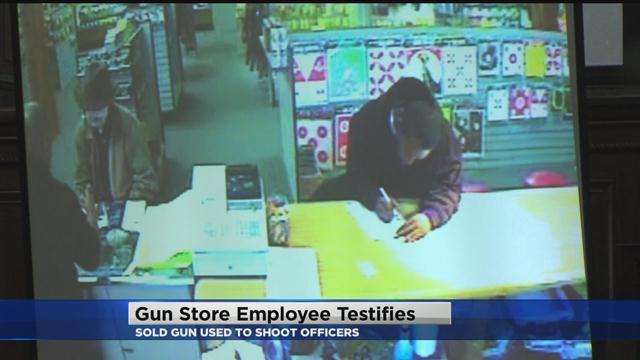 In Milwaukee County Court prosecutors questioned the employee who sold the gun, used in a straw purchase to shoot two MPD officers. The civil suit will decide if Badger Guns should be held accountable.

On the stand the employee was asked anything from how he was trained to what he remembered about that sale.

Two Milwaukee Police Officers filed the civil suits after they say Badger Guns didn't stop a straw purchase that led to the shooting of officers Bryan Norberg and Graham Kunisch.

Attorneys representing the two officers called Badger Guns employee Donald Flora and asked why Mr. Flora sold the gun to a man who didn't know his own address. The buyer had crossed off his address on the form and written in a different one. The employee said the man had "trouble with the written word."

Prosecutors said changing an address is a sign of a straw purchase and asked if he had gone through federal training learning his responsibility in that role. He said no again, but fired back saying this wasn't intentional.

Donald Flora, Badger Guns employee says, "The last thing we want to do is put a gun in someone's hands that has it's gonna commit crime that's going to use it for the wrong purpose or not about that we want to do what's right."

Tomorrow they'll be back in court listening to more testimony from witnesses.