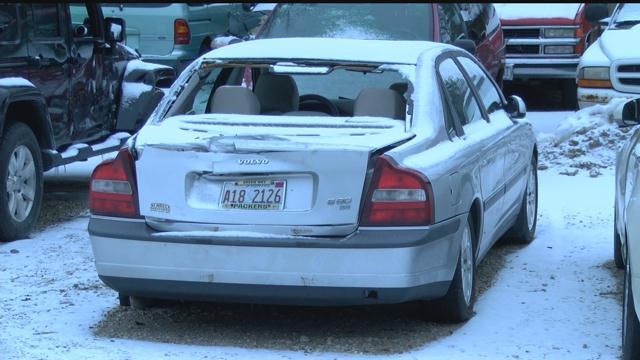 Orange barricades are up and so is a sign that reads "car wash closed." Though unexpected, the Lake Geneva Fire Department said that's what they're trained to expect.

"Our protocols were in place just like rescuing a person," said firefighter Jason Fischer.

But this time, it was saving cars from Lake Geneva. Fischer spent nine hours in the icy water, but never felt a thing.

"You stay warm and dry for as long as you want to stay in it," he said.

He's talking about a gumby suit. It's insulated and water-proof, a key piece of equipment in any kind of shallow water rescue.

"We train every year," he said.

But Saturday's effort had a twist.

No lives were at risk, so firefighters took their time working with the tow company to hook up cable to the cars. They cleared the way of chunks of ice to pull them to land.

"These big chunks of ice did a lot of damage to the cars themselves," Fischer said.

Those cars include a Cadillac, truck and jeep.
"They're all totaled," said Mark McClellan, owner of Larry's Towing. "These were completely submerged in 15 feet of water."

McClellan has those nine cars on his tow lot. He said it took cranes to get them to the lake's surface.

"My heart sunk when I saw that GMC go in," he said. "Because it was a chain reaction, you could just watch one after the other drop in."

McClellan said the car owners will be charged for the extra reinforcements called in. Some bills are in the thousands and he said insurance may cover some of the costs.

But luckily, no one was hurt, thanks to the joint effort.

"We had a lot of help from the fire department," McClellan said.

"Their experiences helped us get cars out safely," said Fischer.

The assistant fire chief said it was a long day under tough conditions, but the crews did a great job. However, they know this incident on Lake Geneva won't be the last.