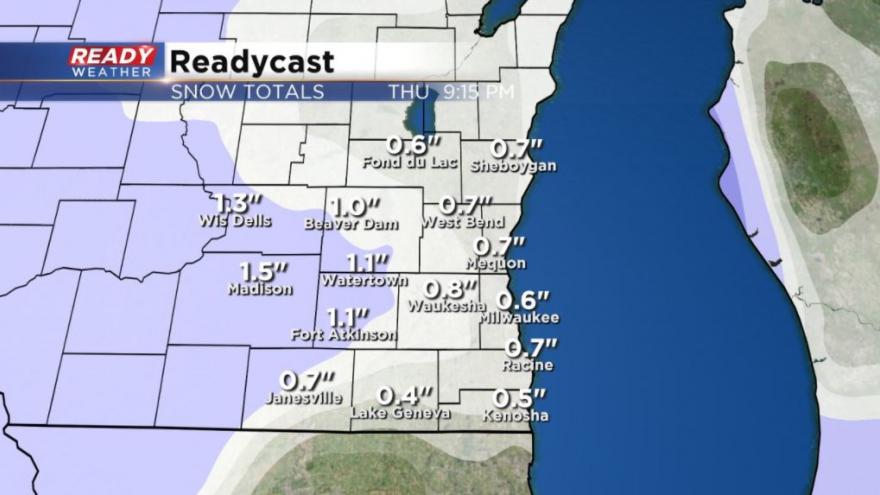 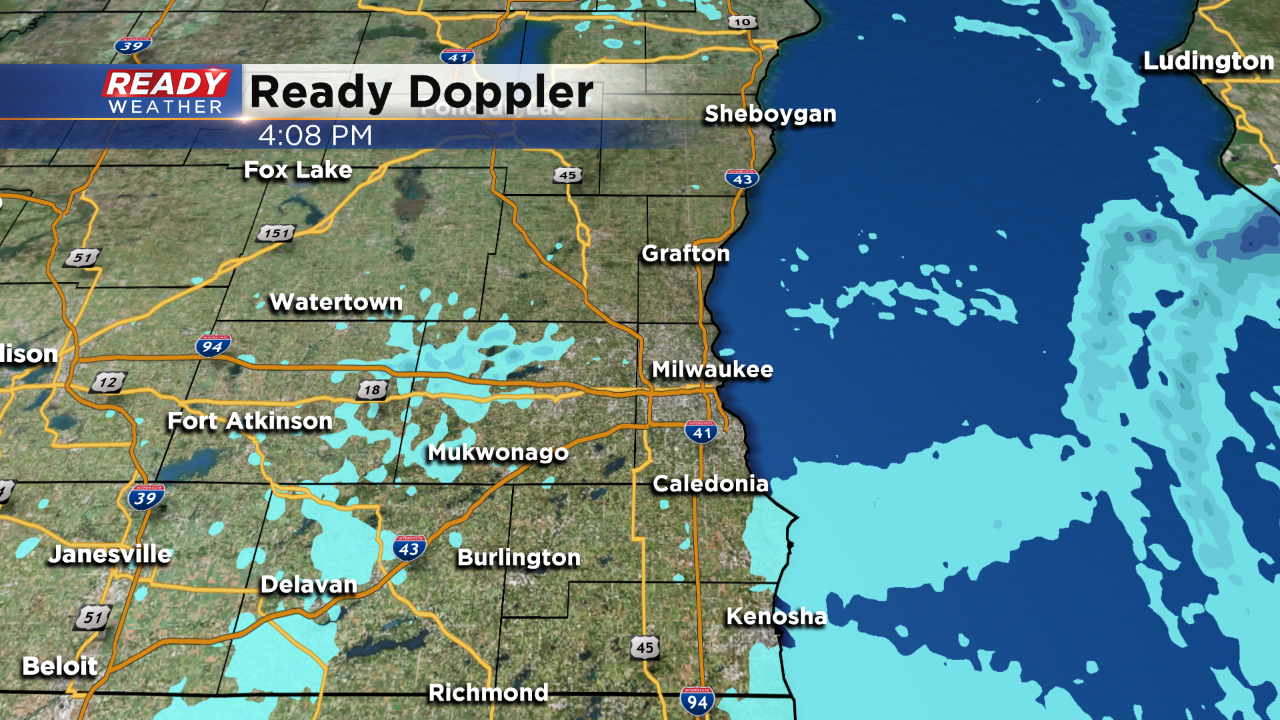 Most of the measurable snow is coming to an end this evening; however, flurries will likely continue.  Side roads have become slick in areas, so use caution as your travel.

Another batch of snow is forecast to arrive for Friday afternoon and evening. Most of that snow will fall south of 94 across Racine, Kenosha, and Walworth counties.  Another half an inch to an inch is possible in those areas. 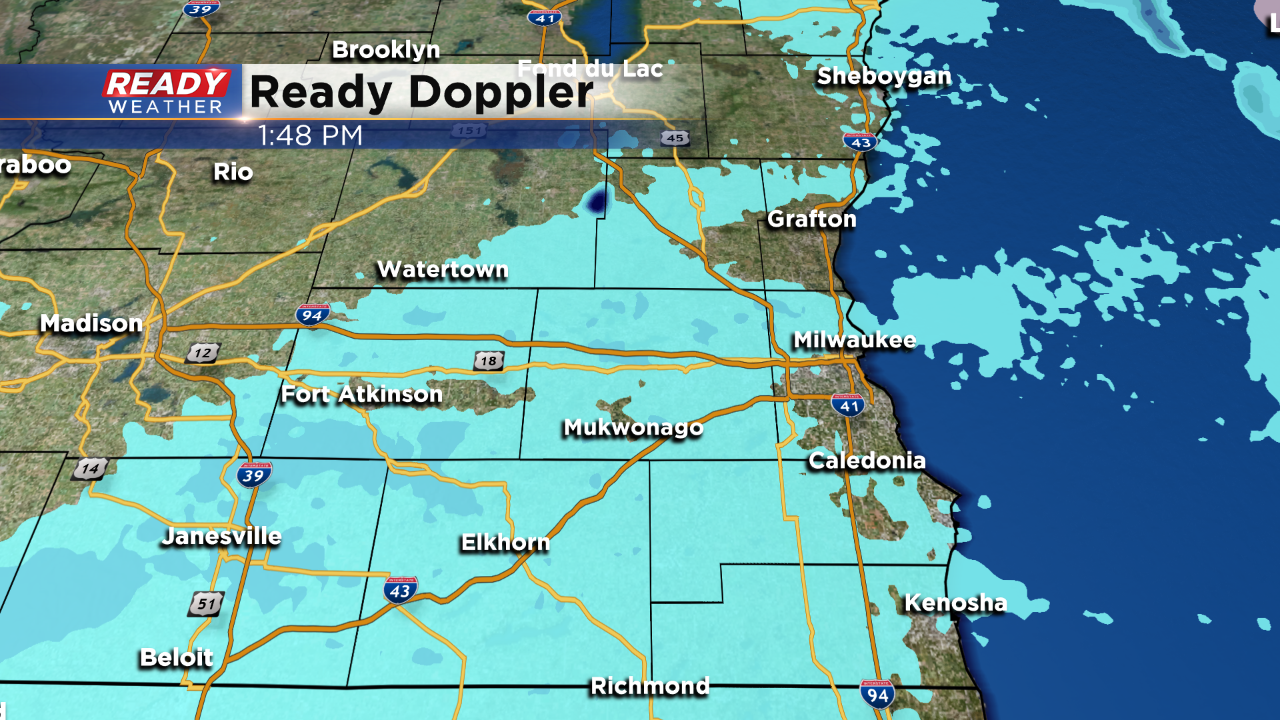 Snow continues to fall across the area, especially along and south of I-94.  The dry air is reducing the size of the flakes, so heavy accumulating snow isn't anticipated this afternoon or evening.

The total snow accumulation will be from 0.5" to 1.0".  With temperatures in the teens the snow will create some slick roads, especially side roads this evening. Use caution for the commute.  The light snow should come to an end by 8 pm or so.

Snow began falling across southeast Wisconsin around noon and continues to move east. A light, fluffy snow is expected to continue for the evening commute leading to slick roads. Snow will wrap up around 7 p.m. with a few flurries lingering after. expect snow totals to stay around an inch with most seeing between a half to 1.25" of snow. 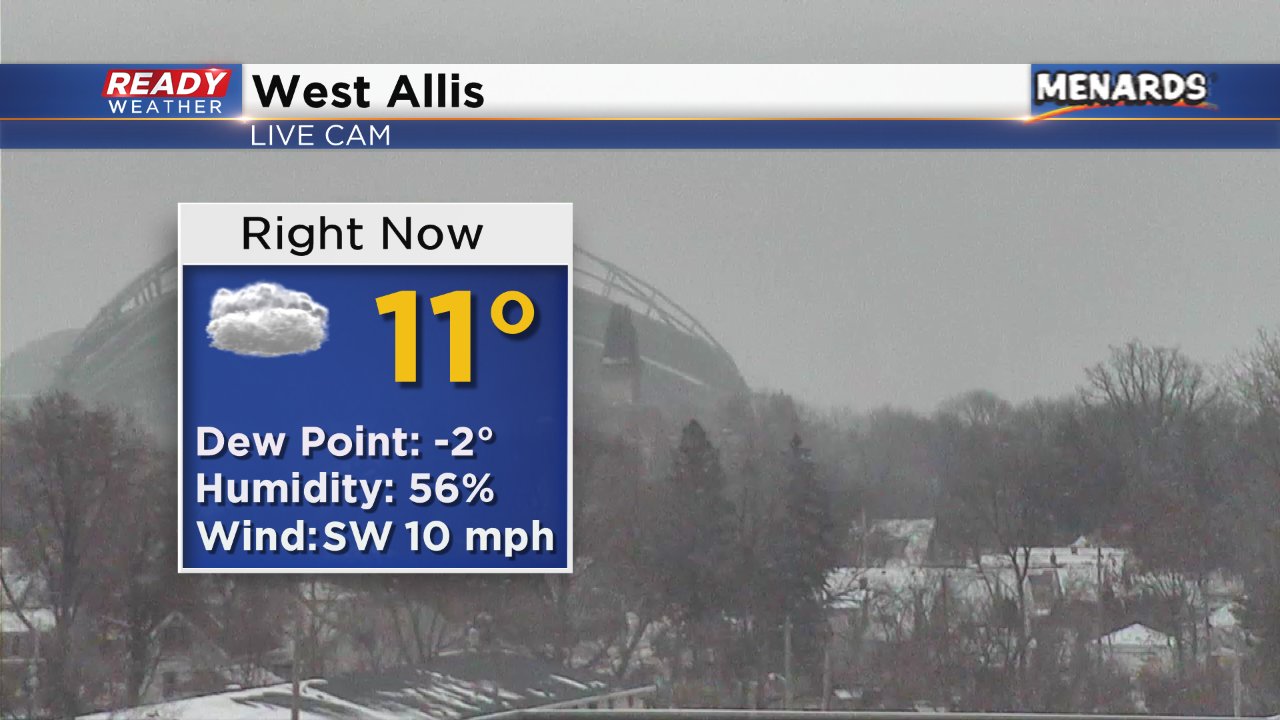 Another round of snow is still on track for Friday arriving in the early afternoon and lasting until evening. Another quick inch or so of snow is possible. With the two rounds of snow most of the area ends up with 1-3" of snow. 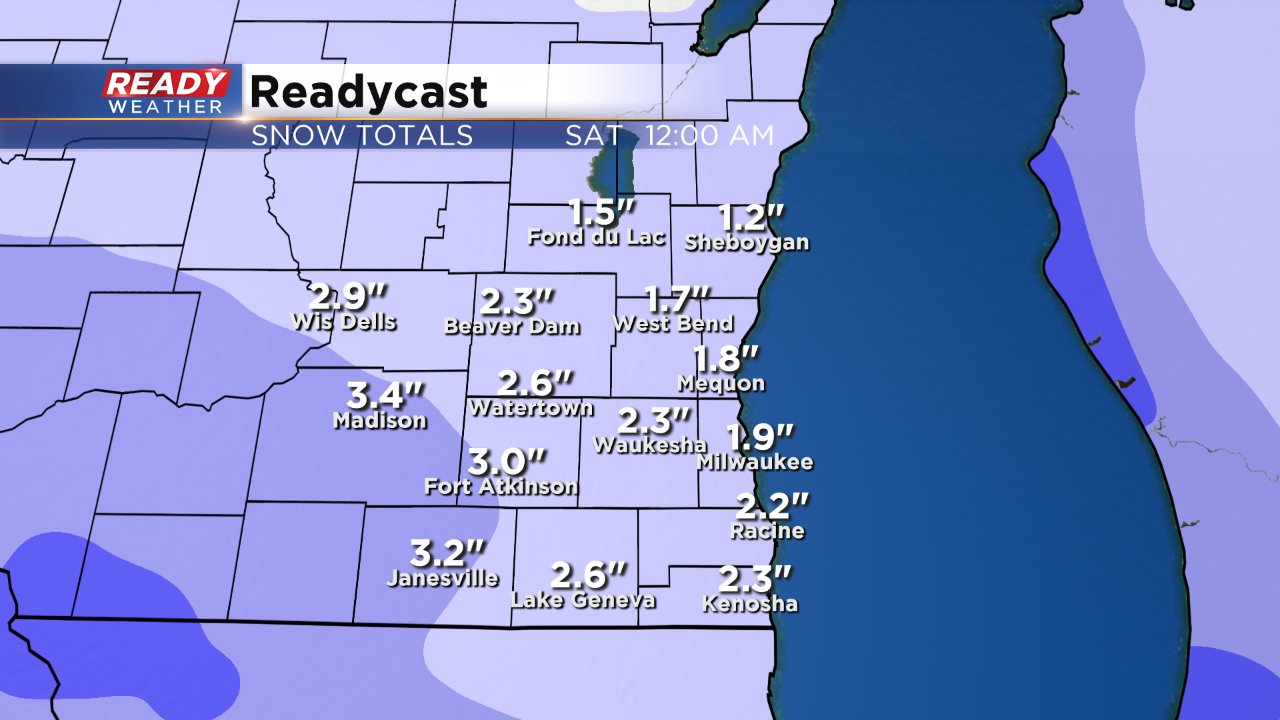 Bitter cold and gusty wind returns Friday night with wind chills on Saturday as cold as -30°. A wind chill advisory will likely be needed.

Still on track for snow arriving by lunch, at least across the Milwaukee metro area.  Look for it to stick around through the early part of the evening, perhaps dropping an inch of snow.  Please watch the roads since black ice could be a problem with the light and fluffy snow.  It looks like another system could affect us as well for Friday evening's rush hour into Friday night.  Beside some Lake Effect snow along the lakeshore on Sunday, the weekend promises to be cold and dry.  Stay tuned to CBS58 on air and online for the latest updates. 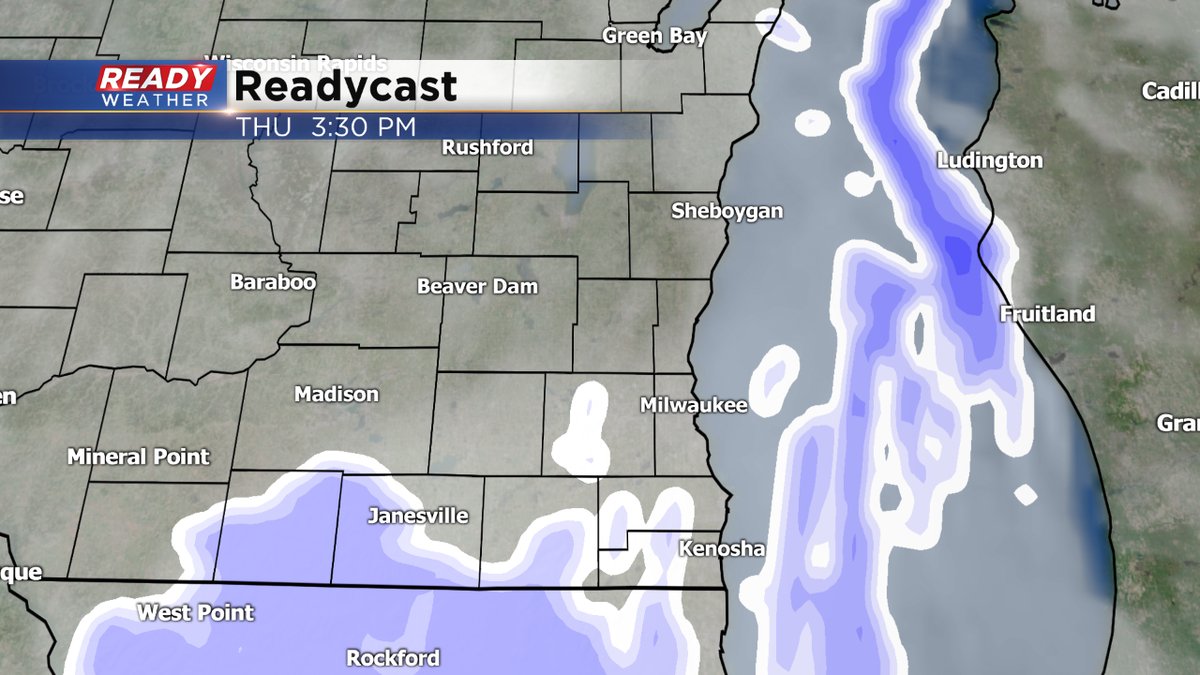 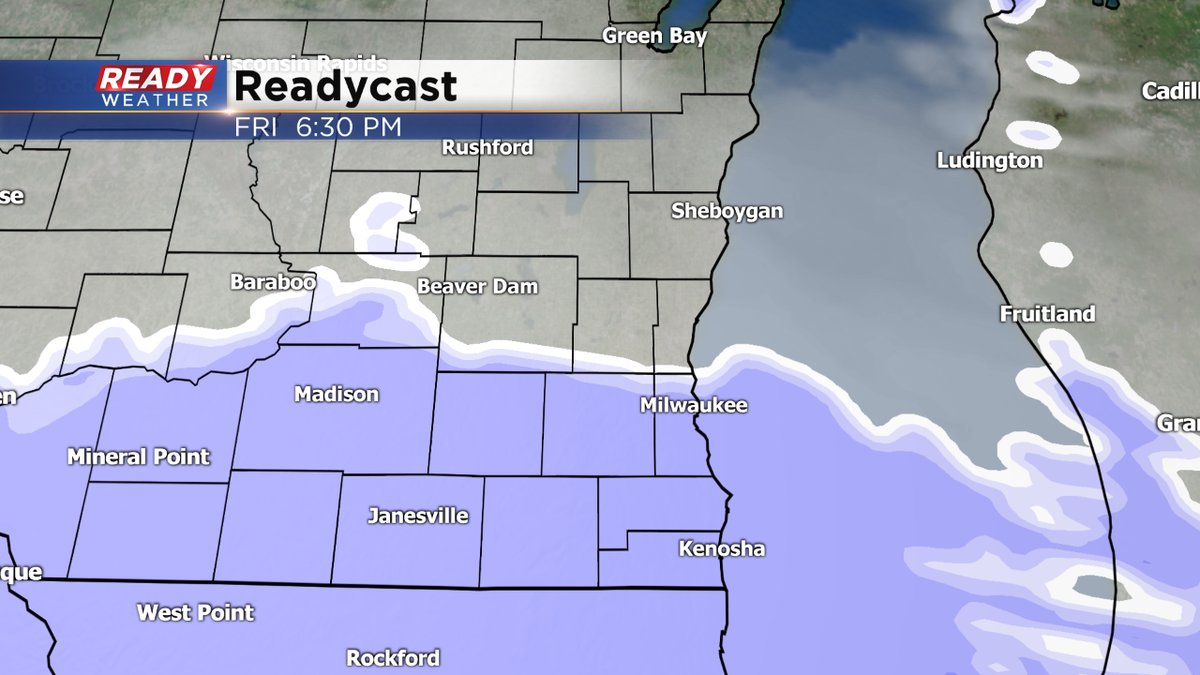 The snow is still coming, but it'll be a little later than first thought.  The air is very dry in place.  So now we're expecting the snow shower activity to begin late this morning and pick up in the afternoon.  It should taper off by mid-evening.  Could see an inch or snow so watch the roads, especially for the evening rush.

Today was the coldest day of 2017!  The morning low of -4 is the coldest temperature since Milwaukee dropped to -7 on December 19th, 2016.  The cold talk is important because it's going to stick around into Thursday.  As snow showers approach the area Thursday morning into the afternoon, that snow could cause slick areas. 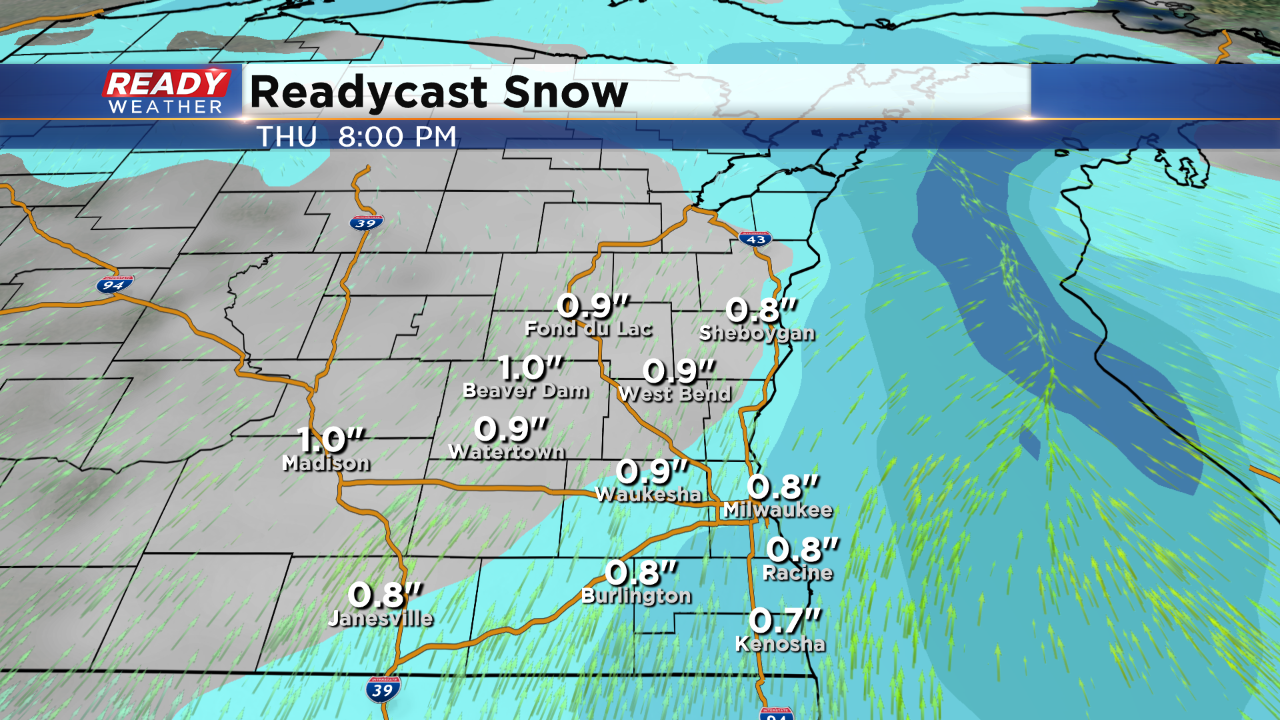 Since this airmass is extremely cold and dry, the snow for Thursday will be rather light and fluffy.  As cold as the ground is, it won't take much for the snow to accumulate on sidewalks and roads.

The snow will cause slick roads for the evening commute.  Overall most of the area will pick up around an inch or two of new snow.  The best chance for accumulating snow will be from Noon until 7 pm.