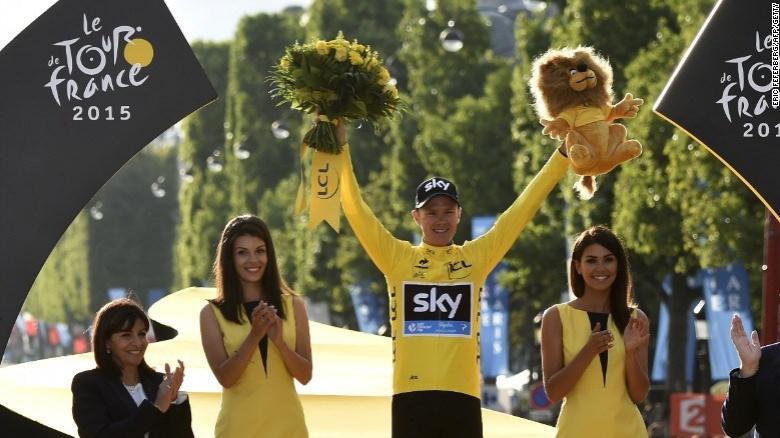 Froome, who was assured of victory after protecting his race lead on the penultimate stage to the Alpe d'Huez, finished safely at the back of the bunch, linking arms with his Team Sky teammates.

Froome was adding to his 2013 triumph in cycling's most famous race -- where Quintana was again his nearest challenger.

Rain had meant Tour organizers neutralized the 10 closing laps around the Champs Elysees so Froome was officially declared the winner soon after he hit the wet cobbled streets.

It left the way clear for the fast men like Germany's Greipel and he duly proved again he is the dominant sprinter with his fourth win of the 2015 edition.

He finished ahead of Frenchman Bryan Coquard and Alexander Kristoff of Norway, with Britain's Mark Cavendish out of the placings.

Froome is also the winner of the polka dot jersey for the best climber, while Peter Sagan of Slovakia won the green points jersey.

The build-up to Sunday's closing stage was dominated by reports that French police had opened fire on a car which smashed through security barriers close to the finish at around 8.00 am local time (06.00 GMT)

The incident happened as police and officials tried to redirect traffic away from roads closed for the finish of the Tour.

Security in the French capital has been tightened following the jihadist attacks, which started with the massacre at satirical magazine Charlie Hebdo.

It is not believed the incident was terrorism related.

Kenyan-born Froome dominated the Tour from the opening week, claiming the yellow jersey as early as the third stage. He briefly relinquished it to Cavendish's Etixx-Quick Step teammate Tony Martin, but once back in the overall lead he took command.

The first mountain stage of the race from Tarbes to La Pierre-Saint Martin proved the key to his victory as he cycled away from rivals such as Quintana and Giro d'Italia champion Alberto Contador.

Such was his supremacy and the time gained, it also led to question marks about his level of performance and the inevitable rumors of doping.

Froome responded with a fierce defense of himself and his teammates, but it did not stop a fan throwing a cup of urine at him and others to spit in his direction.

In his victory speech, an emotional Froome said he would always live up the traditions of the race and the yellow jersey.

\"I will always respect it, never dishonor it and always be proud to wear it,\" he told the crowd.