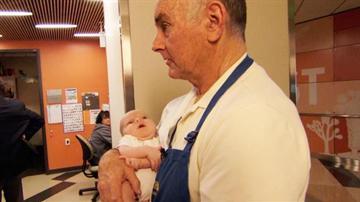 LOS ANGELES (CBS NEWS)-- At St. Francis High School in La Canada, Calif., there's something to be said about math teacher Jim O'Connor. The question is, what is that something?

For whatever reason, none of his students would tell me what they really think of him.

None of the boys came in and said, \"Oh, we have hated him at times.\" I wonder why.

\"He's going to be seeing this, right?\" the student asks.

Truth is, O'Connor can be a bit of a drudge. But the 70-year-old Vietnam vet says he's not here to entertain his students.

\"It drives me crazy when people say school should be fun,\" he says. \"I mean, it's nice if it could be, but you can't make school fun.\"

And for years, the kids thought that's all there was to him -- until last November, when senior Pat McGoldrick learned they didn’t know the half of him.

Pat was in charge of a student blood drive and had just come to Children's Hospital Los Angeles for a meeting. And he says it was weird: whenever he told someone he went to St. Francis High School, they all said, \"Oh, you must know Jim O'Connor. Isn’t he wonderful?\"

\"It was disbelief, really,\" Pat says. \"It was almost, like, kind of finding this alter ego that he has.\"

Inside the blood donor center, Pat found a plaque listing all the top blood donors at the hospital, including the record holder, Jim O'Connor. Then he learned something even more unbelievable: that whenever O'Connor isn’t torturing kids with calculus, he's on a whole other tangent -- cuddling sick babies.

Three days a week for the past 20 years, Jim has volunteered at the hospital, stepping in when parents can't, to hold, feed and comfort their children.

\"I just like them and relate to them somehow,\" O'Connor says.

O'Connor has never been married; he has no kids of his own. But he has fallen hard for these babies.

He's not a tough guy at all.

\"I've always respected him, but now it's to an even different degree -- really to the point where I try to emulate him,\" Pat says. \"He's the epitome of a man of service.\"