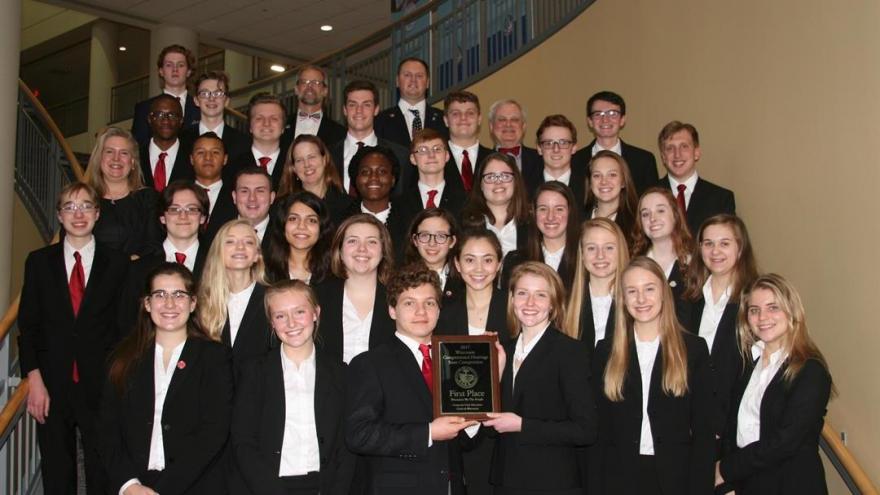 "It's normal.” Said junior Sophie Johnson. “They're opposing parties. They're always going to be clashing but we still need them to work together to form a functioning society. "

?"Just the indepthness that we've taken into looking at the United States government really helps us understand what's going on when they use terms that maybe the general public wouldn't understand.” Junior Joey Wehrley said. “But the ability to decipher that and to understand what's really going going on with the government."

The 10-time consecutive state champion “We The People” constitution team from Tosa West has a new group of juniors every year, and every year, social studies teacher Chad Mateske has led them to a state title and a trip to DC.

"We finished 10th in the country one year where we got to compete on Capitol Hill that year.” Said Mateske. “Last year, our team finished 11th in the country and won the central regional award for the entire nation. So, that was a pretty cool experience."

The We The People competition is set up like a hearing. A unit of 4 or 5 students sits before judges who grill them on a certain topic. Sophie Johnson's group focuses on the origins of the US government.

"My unit would get questions like ‘is there a right to a revolution in the government.?” Johnson said. “Do you believe that there is one? Or which philosopher did the founding fathers truly believe in and which one more influenced them."

"It really helps us to understand why these things are happening and it helps us really to predict what can happen in the future and to help understand what's going on with the government." Said Wehrley.

Mateske says the Center for Civic Education, which puts the program on challenges the students with real topics like gun rights and the death penalty. One of the questions for the national competition centers on the electoral college.

"When you come into this class you may have some preconceived concepts of how you feel about some of these topics.” Mateske said. “Our goal isn't to change their minds on anything so to speak, but to make them aware of other arguments, which a lot of American adults don't take the time to do. And so these kids, as juniors in high school are challenging maybe in some cases, their own notions while becoming more aware of the other side's arguments, even if they don't choose to, I guess, drink from the kool-aid."

"I really think that the in depth look that we've taken into this government and the understanding of both the history and what could come in the future, it really helps us to understand why these things are happening." Wehrley said.

The kids learn how to become better citizens in a democracy, how to receive and process information.

"They're going to learn to be able to critically think and figure out research and dissect it and look for bias. They're going to be able to take a stance on an issue and defend it with actual true evidence and reasoning versus just knee jerk responses.” Said Mateske. “So, the thing that these kids are going to walk away with are going to really set them up to be successful individuals, citizens in a democracy and professionals down the road.”

In order to get down the road to Washington, DC the Tosa West team is doing a little fund raising. to the tune of $70,000 to get the entire 28-person team to the Capitol. They're hosting a brunch at O'Sullivan's in Brookfield on Sunday March 12th, they're planning a couple of bake sales and have a GoFundMe page.