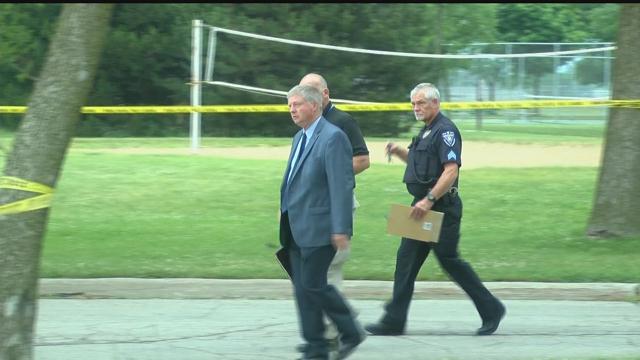 Tosa Together is joining the family of Jay Anderson in demanding full disclosure in the officer involved shooting at a Wauwatosa Park back in June.

The family says it's been getting the run around between police and the district attorney's office with each say the other must approve the release of video footage.

The family wants all footage made public.

After seeing additional and enhance video, a family spokesman claims a conversation the officer who killed Anderson had with a responding officer doesn't match written statements given two days later.

The family further asserts that Anderson had pulled into Madison Park to sleep and that the officer who was investigating the suspicious vehicle had an eight minute long conversation with Anderson before shooting and killing him.

"There was a conversation between the officer who did the shooting the and officer who arrived on scene," explained Michael Kement. "He asked him 'what happened?' That conversation does not match what the officer wrote two days later in his written statement. Please realize the dash cam was turned off then when he radioed in, you get 20 seconds that shows what transpired. That does not match his statement on the scene."

Tosa Together says regardless of what happens in the case, there needs to be a review of police policies.

"We join in their call for the release of all the video of the incident and the written statements of the officer involved," said Ann Heidkamp who joined the family at the Wednesday media conference. "As citizens of Wauwatosa  we have been affected and have questions about Jay's death. Whether or not the D.A. finds the officer  guilty of a crime, the issues in this case go beyond whether or not he's charged, to issues of police policies that have contributed to this tragedy and prevent this from happening again."

The Wauwatosa Police Department has issued the following statement:

"Consistent with our earlier position on this incident we will be making all records of this case available to the public, following Wisconsin Public Records protocols, when the DA's office makes a final determination and issues a report. We ask everyone to withhold judgment until the full investigation is complete, and the entire record can be considered in its entirety when released to the public."