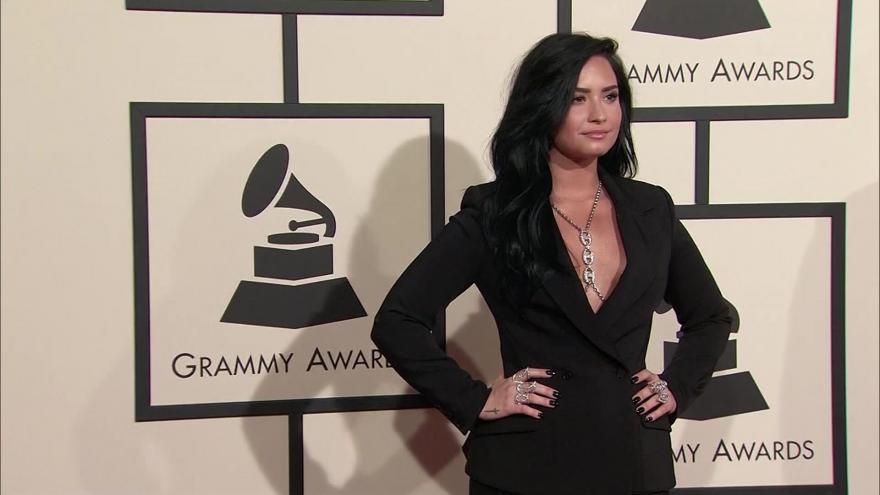 (CBS NEWS) -- Singer Demi Lovato has been "depressed" and "anxious" and in a "downward spiral" recently – and relapsed sometime between April and May, sources told Entertainment Tonight. Paramedics found the 25-year-old unconscious at her Los Angeles home Tuesday morning after she suffered an apparent drug overdose.

The pop star has been outspoken about battling substance abuse and living with bipolar disorder reports Entertainment Tonight's Kevin Frazier. Lovato revealed she relapsed after being sober for six years in a new song last month titled "Sober."

In a statement Tuesday night, her representative said "Demi is awake and with her family" and "her health and recovery is the most important thing right now."

The Grammy-nominated singer was diagnosed with bipolar disorder eight years ago. Since then, she has been open about her struggles with depression and substance abuse and last year, she released a YouTube documentary called "Simply Complicated." In it, she said she began using cocaine at 17 to cope with childhood traumas.

"My dad was an addict and an alcoholic and I guess I always searched for what he found in drugs and alcohol because it fulfilled him and he chose that over a family," she said in the documentary.

"You're very open about your struggles. Why?" "CBS Sunday Morning's" Tracy Smith asked Lovato during a 2016 interview. Lovato replied, "At a young age, I realized that I have -- if I'm going to become a singer, I need to use my voice for more than just singing."

"Demi's whole MO has been sharing and being open with her fans," said Billboard Magazine editorial director Jason Lipshutz. "Just figuring out a way to lay everything on the table so that there is nothing to hide."

Lovato's camp says there is misinformation out there and they'd like privacy during her recovery. In her song, "Sober" Lovato says, "I wanna be a role model but I'm only human."

(CBS NEWS) Demi Lovato was hospitalized on Tuesday for an alleged heroin overdose, TMZ reported. Los Angeles Police Department officials confirmed to CBS News that they responded to a drug overdose at the 8000 block of Laurel View Drive in Hollywood Hills, California, where Lovato's home is located.

Lovato has talked openly before about her struggle with substance abuse. In June, she released a song called "Sober" about a relapse after six years of sobriety. In the song, she apologized for letting down her family and fans.

In February, Lovato told CBS News that her single, "Tell Me You Love Me" was actually about conquering her addiction as well. "People think it's a breakup song," she said, "but it's actually kind of a breakup song with myself and my bad habits."

The singer performed at the California Mid-State Fair on Sunday with her friend, Iggy Azalea. Azalea revealed to ET that she knew about Lovato's relapse and was worried someone would use the news against her, but said ultimately, she was proud of Lovato for sharing her struggle in "Sober."

In March, Lovato revealed that she had such a bad experience at the 2016 Met Gala that she thought about relapsing. She said she went straight to an Alcoholics Anonymous meeting instead. Lovato called the affair "a terrible experience."