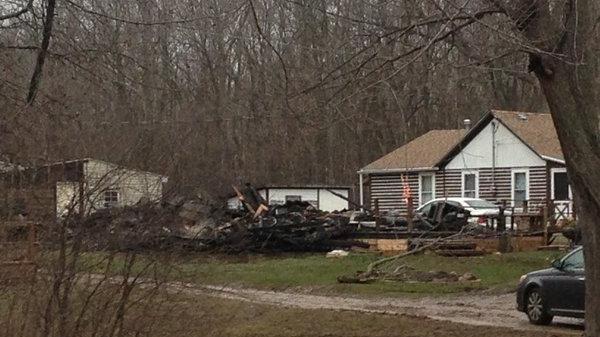 The fire started sometime before 2:30 am when Tichigan volunteer firefighters got the call. Fire investigators say it's too early to tell what caused it to start.

"We just saw this house engulfed with flames. We didn't know which one it was. Assumed it was behind houses because we saw the shadow of the houses in front," neighbor Steve Larry said.

"We could see [the flames] over the house. The firefighters had trucks all the way around the corner and then on that corner lot by the lake they were getting the water," another neighbor, Amy White, said.

In the end the fire investigator said  heavy equipment like a backhoe brought down the home creating a pile of charred walls and furniture.

A friend of the family who live there, Rebecca Biebesheimer, said she drove over as soon as she finished her shift at work.

"They are amazing people. They've helped me through a lot of things. Just amazing hearts and I'm really sad to see their house is this far gone. I came by hoping that it wasn't this far gone," Biebesheimer said.

She says the destroyed building was home to a mother, father, and two teenage children.

Doctors checked the family members out after the fire and they've since been released from a local hospital, Tichigan firefighters said.

"Honestly all they do is give and this is like wow," Biebesheimer said.

"And they have a lot of friends who are around that all love them so if they need anything we're there," Biebesheimer said.

"Neighbors will rally around neighbors. So that's the good news about the area that we live in," Larry said.

The Wisconsin Red Cross is also assisting this family short-term as they find a new place to stay going into the new year.