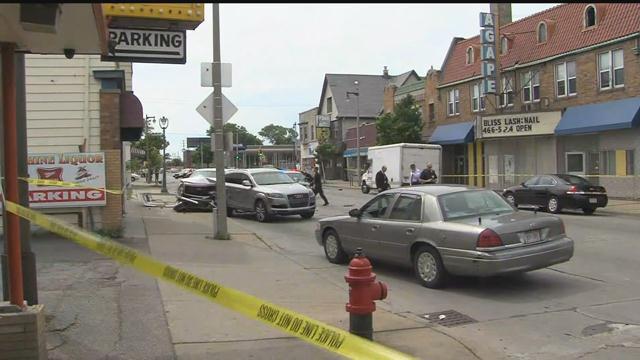 On Sunday, June 12 around 12:30 AM an off-duty Milwaukee Police Officer on his way home from work observed a suspicious vehicle and suspects appearing to be breaking into vehicles in the area of North 89th Street and West Chambers Street.

The officer followed the vehicle, a silver Ford F-150, as it left the area. One of the suspects fired several gunshots at the officer as the vehicle drove away.

No one was struck by the gunfire.

Later on Sunday around 1:20 PM in the area of North Sherman Boulevard and West Hampton Avenue, MPD officers located the F-150. A vehicle pursuit began when officers attempted to stop the F-150 and it fled from them.

When the pursuit reached the area of North 37th Street and West Villard Avenue, the F-150 disregarded a red light and struck a northbound Nissan Sentra. This caused the Ford to strike a Chevy Cruz that was also driving in the area.

Before coming to rest the Ford struck two parked vehicles. Three suspects fled from the Ford. As they ran, an MPD officer shot at one of the suspects who police believed to be armed. No one was struck by the officer's rounds.

The suspects were taken into custody a short time later.

Two handguns were recovered from the F-150.

The suspects were taken to a local hospital for medical evaluation.

The driver of the Nissan Sentra was not injured. Two adults and three children in the Chevy Cruz were all taken to a local hospital for treatment of what is believed to be non-life-threatening injuries.

The investigation is ongoing and the case against the suspects will be presented to the Milwaukee County District Attorney's Office in the coming days.