Three suspects sought for armed robbery of north side Walgreens 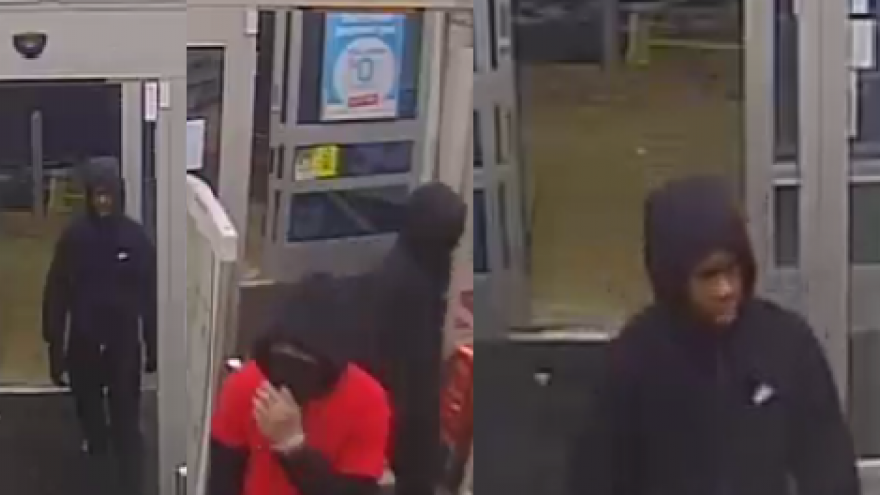 MILWAUKEE, WI (CBS 58) -- The Milwaukee Police are looking for three people suspected of robbing a Walgreens store on the city’s north side.   The three, two men and a woman,  are wanted in the early morning  armed robbery of the Walgreens at N 76th Street and W Mill Road on December 29.  Around 6:50 AM the three suspects entered the business brandishing a handgun and demanding the store clerk give them money.   After obtaining an undisclosed amount of cash, the three fled the store in an unknown direction.

Suspect number one is described as a 17 to 21-year-old black male, 5’8” to 5’9” tall, weighing 140 to 150 pounds.  He was wearing a black winter cap, black mask, black shirt under a red shirt, black pants with black shoes and clear gloves.   He was armed with a silver handgun.

Suspect number two is a 17- to 21-year-old black male, 5’6” to 5’7” tall with a slim build.   He was wearing a black hooded seatshirt, black mask, black pants, black shoes and black gloves.  He was armed with a dark-colored handgun.

Suspect number three is described as a 17- to 21-year-old black female, 5’5” to 5’6” tall with a slim build.   She was wearing a black hooded sweatshirt, black mask, black pants, black shoes and black gloves.

Anyone with information about any of the three suspects are asked to call the Milwaukee Police at 414-935-7360.