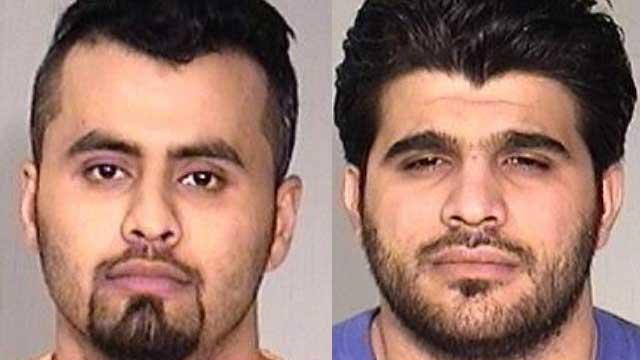 According to the criminal complaint, agents sold 32 new iPhones, a new laptop computer, and a new television with a total retail value of $21,507 to Younis, Samer and Mahmood. They “knowingly purchased the items believing they were stolen in Chicago and transported to Milwaukee.”

According to the criminal complaint, Younis was working at the 27th Street Tobacco in Milwaukee on September 17, 2104. An undercover FBI agent went into the store and offered to sell Younis two cellular phones and advised him they were stolen. Younis expressed interest in purchasing the phones as long as the price was right. Younis said he would purchase them if they were Global System for Mobile standard which can operate overseas without further modification.

Younis purchase the items for $500. The total retail price was $2,531.22. Younis requested 10 more iPhones at a later date. He stated he knew the activity was illegal and that he sells the phones overseas.

On September 26, the FBI agent recorded a telephone call with Younis where he requested to purchase 10 iPhones.  During the call, Younis requested a flat screen television along with the iPhone.

On September 28, Younis contacted the agent to tell him to contact him at a new phone number. The agent asked Younis what he wanted stolen off a truck in Chicago. Younis requested 10 iPhones and two laptop computers.

“Remember, this is illegal. You do not know me and I don’t know you. You get your money and I’ll get mine,” Younis said.

On September 30, US Customs and Border Protection intercepted a package with sender information of Younis Al Jayab. The package was addressed to an individual in Romania. Upon inspection, CPB found that the package contained a Galaxy Samsung S4 phone.

On October 5, the agent called Younis to confirm that he wanted 10 iPhones. Younis instructed him to meet him at a Walmart in South Milwaukee.

At the location, the agent observed Samer and Mahmood walking in the Walmart parking lot towards the store entrance. Shortly thereafter, Younis, Samer, Mahmood approached the agent. Younis said he chose the location because it did not have video surveillance. Mahmood said that five of the 10 iPhones being sold were going to him.

On October 7, Younis was observed carrying a packing into the express mail facility in Oak Creek. Younis departed the store with three small shipping boxes.

Case agents learned that Younis visited another express mail facility in Milwaukee on October 7. The agent said Younis tried to ship two cell phones to Romania and one to Cyprus.

On October 7, CBP did an inquiry on Younis outbound international shipments He shipped one cell phone on May 28 to Cyprus, on July 1 shipped more than one phone to Cyprus,  September 9 shipped a phone, nickels, ring and watch to Romania, and on September 30 sent one phone to Romania.

On November 6, the agent spoke with Younis regarding purchasing more iPhones and televisions. The agent said he could not make the trip to Wisconsin this time. However, the agent said his cousin would delive