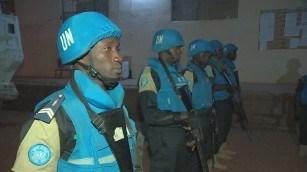 (CNN) A mortar attack on a U.N. base in northern Mali early Saturday killed three people -- two peacekeepers and a contractor -- and injured 20 others, a spokesman for the nation's U.N. mission said.

There was no immediate claim of responsibility, spokesman Olivier Salgado said from the capital of Bamako.

Mongi Hamdi, the head of the U.N. mission, condemned the attacks and offered condolences to the families of those killed.

"I want to reiterate that these attacks will not impede the determination of the United Nations to support the Malian people and the peace process, including through assisting the implementation of the Agreement on Peace and Reconciliation in Mali," Hamdi said.

The mission is known as MINUSMA, the United Nations Multidimensional Integrated Stabilization Mission in Mali. The agreement to which Hamdi referred was signed by all parties to Mali's disputes and is meant to bring peace to the West African nation.

Mali has been wracked by violence in recent years, including an Islamist insurgency that prompted French forces to intervene in the country in 2013. That year, the United Nations established its peacekeeping mission in Mali.

A separatist Tuareg rebellion, meanwhile, has raged in the north. Groups have been working on an Algerian-brokered peace deal, signed by a group representing Tuareg-led rebels, that allows for greater autonomy in the north.