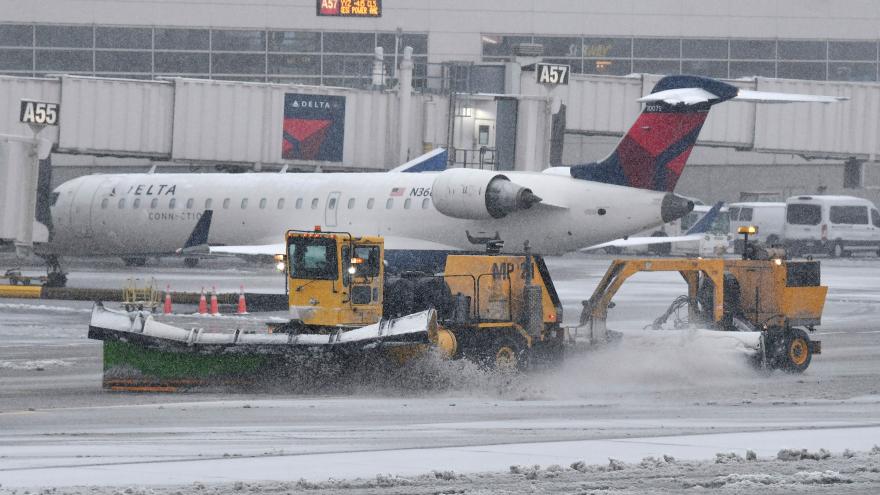 (CNN) -- US airlines have canceled thousands more flights Thursday as a powerful winter storm packing ice, rain, sleet and several inches of snow is stretching from the Midwest to the South and eventually parts of the Northeast.

On Thursday, there are nearly 4,000 cancellations within, into, or out of the United States, according to flight tracking site FlightAware. There are more than 3,700 flight delays as of Thursday morning.

Across the Midwest, St. Louis, Indianapolis, Columbus, Cincinnati and Cleveland all have sizable disruptions to their schedules too.

Airlines issue travel waivers letting travelers rebook for free when severe weather impacts operations. CNN Travel has a guide about what to do if your flight is affected.

The system's reach is so expansive that more than 100 million people across at least 25 states were under winter weather alerts as of early Thursday from the Mexican border to New England. And some areas, including Texas, are expected to feel those impacts through Saturday afternoon.

Heavy snow began falling Tuesday and more than 20 inches had piled up in the Colorado Springs area, according to the National Weather Service. Parts of Illinois were inundated with more than a foot of snow, while Indiana had tallied more than 11 inches. That caused more than 2,300 flight cancellations across the US.

It's been a miserable few weeks to be an airline traveler, especially after last weekend's storm that complicated travel. Winter weather and Omicron surges left 20,000 US flights canceled over the busy holiday travel season. As travel picked up, staffing cuts also left airlines with fewer employees than they had before the pandemic.