Thousands Come Aboard for Sprawling Trainfest 2015 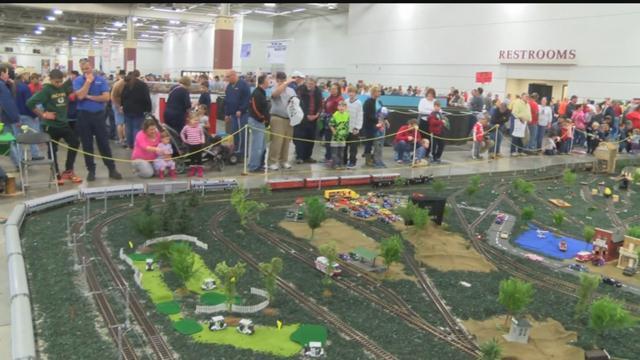 Kids gathered around the LGB Chicago Express area watching closely as the model trains passed by.

Jack Morris, a little boy from Mountain Lake, Illinois, said seeing these trains is all new to him.

All he's got at home is a track made of wood and plastic.

"Not like that one. Not like this one. At home I have a different kind of one," Morris said while sitting next to his uncle as the trains rolled by.

But even here sometimes a train might need a little push.

"It's easier to set up on a straight run," 85-year-old Clarence Volk said, picking up a car than had been knocked off the track. He's a member of LGB Express.

Volk, who grew up in Milwaukee, got his first train set at age six.

"Well, as a youngster it was only put up at Christmas-time," Volk said.

"Now I've actually physically rode these trains that I have models of," Volk said.

He got really involved in setting up model trains about thirty years ago. He's even set up trains at the Mitchell Park Domes in the past.

But when kids show interest at Trainfest...

"Well, we get them involved and they are really amazed," Volk said.

"What they like is the action of it. And their smiles, they're really, really involved in it. They get into it when I give them the control," Volk said.

"I got it so I'm where being involved with it and enjoying it brings back fond memories," Volk said.

Back to the sidelines, admittedly, Jack Morris said what he wants most for Christmas is a race car.

However, new pieces for his train set also made his list.

"I don't have the tracks at home, so I'm going to get some tracks from Santa Claus," Morris said.

Doors re-open for Trainfest starting at 9 AM Sunday. That's the last day of the 2015 event.