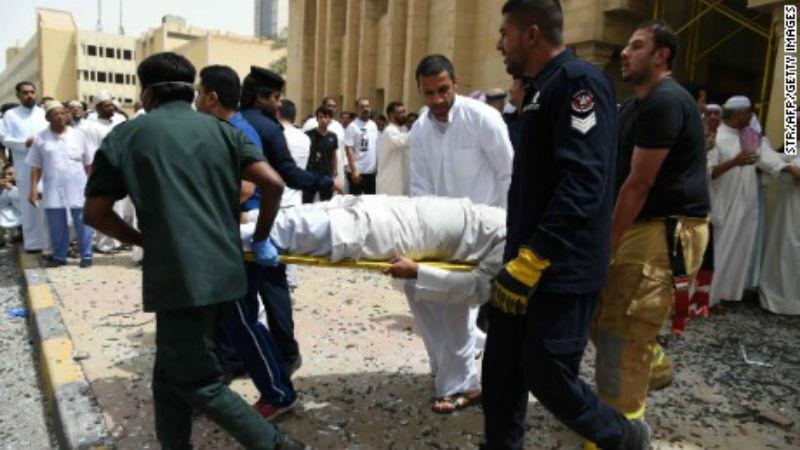 KUWAIT CITY, Kuwait (CNN) -- Thousands of Kuwaitis attended the funerals Saturday for the 27 victims of a suicide attack on a Shiite-affiliated mosque in the heart of Kuwait City, an attack for which ISIS claimed responsibility.

A bomb ripped through the Al-Sadiq mosque during Friday prayers, killing 27 worshippers. It was the worst terror attack Kuwait has seen in many years and one of three that took place on three different continents Friday.

Kuwaiti police arrested the man who drove the suicide bomber to the mosque, the country's state-run Kuwait News Agency reported early Sunday. There were no other details immediately available, but the Interior Ministry said earlier it had made a number of arrests and detained the owner of the car used by the bomber.

Beyond the manhunt looms the issue of preventing such attacks in the future and ensuring that ISIS, which is wreaking havoc in neighboring Iraq and also has claimed attacks in Saudi Arabia, doesn't do the same in Kuwait.

Kuwaiti newspapers Saturday carried messages of unity in this emirate where Shias are one-third of the population.

\"The huge turnout of mourners shows today, this society rejects all divisions and sectarian rifts,\" said Speaker of the Parliament Marzouq Al-Ghanim. \"The objective of the criminal terrorist act failed miserably since it sought to sow the seeds of division and sectarian strife,\" he said.

Forensics teams continued to look for clues in and around the mosque Saturday amid heavy police presence. Shards of glass, bloodstained clothing and shoes were strewn all over from the powerful explosion, which police say blew out car windows in a nearby parking lot.

Cell phone video apparently shot in the bombing's aftermath and posted to social media showed worshipers walking and stumbling through a dust- and rubble-filled interior of the mosque, many with their white robes splattered with what appeared to be blood.

In addition to the dozens dead, at least 227 others were wounded in the blast, official said. Most of them have left area hospitals. Three of the dead were Iranian citizens, according to state media.

Kuwait's Emir, Sheikh Sabah Al-Ahmad Al-Jaber Al-Sabah, vowed the \"cowardly terrorist attack\" on the mosque would not undermine national unity and that the perpetrators would be brought to justice, according to the Kuwait News Agency.

He sent condolences to the families of the victims and toured the damaged mosque ahead of emergency Cabinet and parliamentary meetings, the state-run Kuwait News Agency reported.

The country's Justice and Islamic Affairs minister, Yaqoub Al-Sanea, called the attack \"a terrorist and criminal act that threatens our security and targets our national unity,\" the news agency said.

ISIS also claimed responsibility for an attack on a seaside resort hotel in Tunisia on Friday, in which a gunman killed 38 people, mostly Europeans. Two U.S. officials said they believe the shooting in Sousse may have been inspired by ISIS, however -- not directed by it.

In southeastern France, a man previously on that country's terrorism watch list caused an explosion at a factory that injured two people. Authorities later found the decapitated body and severed head of the man's employer.